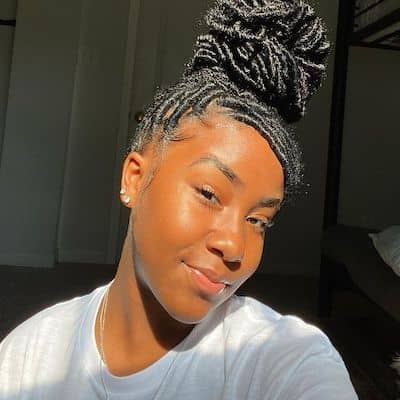 Jalaiah Harmon’s relationship at present is possibly single. The details of her current or past boyfriend/affair are not revealed.

Who is Jalaiah Harmon?

Jalaiah Harmon is an American dancer and web personality. The public noticed her for appearing in TikTok with renegade dance.

For her talent, she was nominated for MTV Movie & TV Award for Breakthrough Social Star.

She was born as Jalaiah S. Harmon on 28 Aug 2005 in Born: Atlanta, Georgia, United States. The name of her mother is Stefanie Harmon but her father’s identity is unknown.

Jalaiah’s ancestry is All-American and talking about her academics, she has not shared the details. But after her school, she used to go to train in hip-hop, ballet, lyrical, jazz, tumbling, and tap dance styles.

Jalaiah Harmon is popular on the web world. Her viral TikTok renegade dance videos are loved by the viewers. On this platform, she has gained almost 3 million fans with over 34.6m likes.

Her unique style is so famous that she was invited by New York Times in Fen 2020 and she also performed at the NBA All-Star game in 2020. The footage of her dancing in the game was posted by TV star Kim Kardashian.

Harmon was also seen in a hit talk show The Ellen DeGeneres Show.

Moreover, she also has thousands of followers on her official Instagram account. Here she posts her dancing videos and pictures for her more than 642k followers.

At present, her net worth is estimated at around $100k. However, her salary and other earnings are unknown.

She is associated with brands like Samsung, Prada, Bloomingdale’s, and Netflix. Some of the top web star’s financial worth is,

This TikTok star is keeping herself away from rumors/scandals. But she is constantly in the media’s eyes for her amazing dance.

Regarding Jalaiah Harmon’s body features, her height is 5 ft 6 inches and her body weight is average.

Moreover, her eyes are dark brown, her hair is black, and has a dark skin complexion.