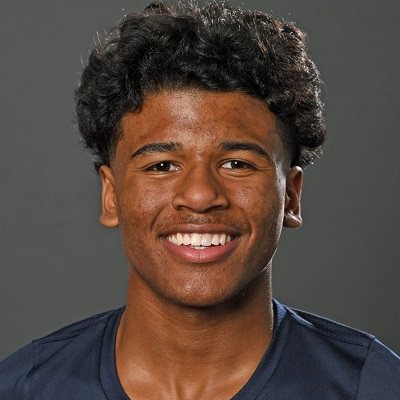 Besides being the heart of many female fans, his relationship status is single. To date, he has not disclosed any past relationship and dating.

As of now, the rising basketball player is focusing on his basketball career. Possibly the player might be waiting for the love of his life.

Who is Jalen Green?

Jalen Green is a professional basketball player. He is renowned for his jump shots that can knot down any defender

Currently, Jalen is playing with the NBA G League as Shooting Guard.

Last, in 2020, Jalen was scheduled to play for the team West in the 2020 McDonald’s All-American Boys Game. Besides that, he was selected for the Jordan Brand Classic and Nike Hoop Summit too.

However, all of the three games were canceled due to the coronavirus pandemic.

Jalen was born Jalen Romande Green on the 9th of February 2002 in Merced, California.

He comes from a family of athletics. His mother, Bree Purganan used to play basketball, soccer, and cross country race in her college days. Currently, she is a nurse by profession.

Also, his biological father was also a football and basket player. However, he has not shared any details of his biological father. Apart from that, his step-father, Marcus Green happens to be a teammate of NBA player, DeShawn Stevenson in their High School. They are of Jewish ethnicity.

He grew up in Merced, California. Later, he moved to Fresno, California along with his family. From childhood, he had a keen interest in playing basketball.

When he was in grade six, he used to practice basketball five hours a day. At the time, he was associated with Amateur Athletic Union basketball. Later, he attended San Joaquin Memorial High School in Fresno.

Jalen Green started his journey as a basketball player with the High School team. Altogether, he played for three years for the team. As of freshman, he had an average point of 18.1 and nine rebounds per game.

Moving forwards, he ended the sophomore year, with an average point of 27.9 with 7.7 rebounds per game.

As a captain of the team, he led the high school team to the finals of Central Section Division II. In the finals, the team was only able to secure the position of runner-up. The year, he was named MaxPreps National Sophomore of the Year.

Later in their junior year, he made an average of 33 points with eight rounds per game. The year, his team won the Central Division II championship. Also, the year, his team made it to the quarterfinals in the CIF Northern California Division I.

In their senior year, he got transferred to Prolific Prep in Napa, California. He ended the year with an average point of 31.5 with 7.5 rebounds per game.

Later, in 2018, he earned the second gold medal in the 2018 FIBA Under-17 Basketball World Cup. Also, he was named the MVP of the world cup.

Moving forward, he again earned the third gold medal at the 2019 FIBA Under-19 Basketball World Cup.

As of now, he has not disclosed any details regarding his net worth. As a player of the NBA G League, his earnings are in the range of $500k or above.

However, in 2020, he made quite a headline when he skipped his college career to join NBA G League.

Jalen Green has black eyes with curly black hair. His height is 6 feet 6 inches and weighs around 82 kg.

You may also read the bio, age, education, career, net worth, salary, controversy, and rumors of Patrick Ewing, Alyssa Thomas, and Brynn Cameron.