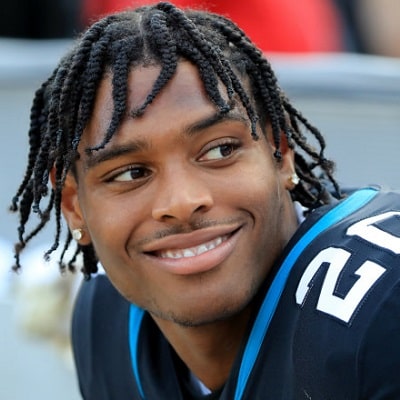 Jalen Ramsey might be in a relationship. He is in a relationship with girlfriend Breanna Tate, a former sprinter at Ole Miss and sister of Golden Tate. The couple welcomed a daughter named Bree Erin on 26 July 2018. Hope, they soon walk the aisle together.

Who is Jalen Ramsey?

Jalen Ramsey is an American football player who is currently a cornerback for the Jacksonville Jaguars of the National Football League (NFL).

She was born on October 24, 1994, in Smyrna, Tennessee, USA. His birth name is Jalen Lattrel Ramsey. He was born to father Lamont Ramsey, a firefighter, and mother Margie Ramsey. He an older brother named Jamal Ramsey.

Jalen holds American citizenship but his ethnicity is unknown.

He joined Ensworth High School and transferred to Brentwood Academy. After graduation, he enrolled at Florida State University.

He was a two-sport star in football and track & field during his high school. He was rated by Rivals.com and Scout.com as a five-star recruit and he was one of the top overall recruits in his class.

Also at the University, as a freshman, he started all 14 games and finished the year with 49 tackles, one interception, and one sack.

He was selected by Jacksonville Jaguars in the first round with the fifth overall pick in the 2016 NFL draft. He signed a four-year on May 22, 2016, $23.35 million, including $22.90 million guaranteed and a signing bonus of $15.18 million contracts with Jacksonville Jaguars.

Moreover, he was picked up the fifth-year option by the Jaguars on April 25, 2019. In June 2019, it was revealed that he won’t be giving him a contract extension this year.

His team became Pro Bowl championship two times in 2017 and in 2018. His other awards include BCS national champion, Consensus All-American, Second-team All-Amerian, First-Team All-ACC two times, and many more.

As per the sources, he has an estimated net worth of around $10 million and he has earned that sum of money from his professional career. Also, he earns around $3.6 million as a salary.

There were rumors that he was gay after he was shown rolling his eyes, shrugging his shoulder, and flipping his hair in a lockerroom interview. But the rumors turned to be false.

Jalen Ramsey has a height of 6 ft. 1 inch and weighs 94 kg. He has dark brown eyes and black hair.