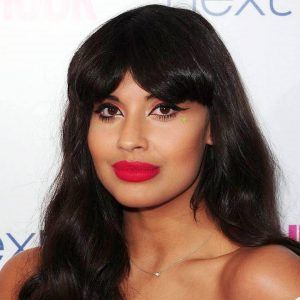 I'm going to reduce my dwindling sex factor by wearing a full chicken suit for a month to all work and events IF I raise £50,000 for Red Nose Day 2013 to change lives both here in the UK and in Africa," the TV / Radio presenter announced. And that's where you come in. If you sponsor me, you'll be helping to make the world of difference. [It] dramatically lessens my chances of pulling. I won't leave the house without the thing. So I'm giving up love for charity... I will wear the chicken suit 15th March- 15th April. (So essentially I won't get laid 15th March-15th April) Donate!

What is the relationship of Jameela Jamil?

Jameela Jamil is going out with a singer and songwriter, James Blake, since 2015. She, sort of, made their relationship public in 2018 by posting a picture of them together on her Twitter account.

Their relationship is now four years old and still, this couple is enjoying each other’s company.

Who is Jameela Jamil?

Besides that, Jamil was the first solo female presenter of the BBC Radio 1 Chart show.

Jameela Jamil was born in London, England, in the United Kingdom on February 25, 1986. Her birth name is Jameela Alia Burton-Jamil.

Her father’s name is unknown and her mother is Shireen Jamil. She was born with congenital hearing loss and labyrinths which later had an effect on speech and the partial loss of her right ear.

While trying to salvage herself, Jameela became a victim of anorexia she avoided meals just to keep her slim and look attractive.

Then at the age of 17, she was involved in a ghastly car accident that almost led to paralysis. She suffered from broken bones and a damaged spine and was also bedridden for two years.

Talking about Jameela’s education history, she went to Queen’s College, an independent girls’ school on Harley Street in London. However, she didn’t complete her A-levels education.

Talking about her profession, Jameela Jamil used to teach English to Foreign students. Then Jameela appeared on the E4 show Music Zone towards the end of 2008. Likely, she began presenting T4 in 2009. In 2009, Alexa Chung left the morning TV show Freshly Squeezed; Jamil succeeded Chung as co-host, alongside Nick Grimshaw.

Additionally, Jamil presented “The Closet”, an online fashion advice show on the social networking site Bebo.  Likewise, from 2011 to 2014 she wrote a column for Company, the women’s monthly magazine. In 2012, Jamil replaced June Sarpong as the new host of Playing It Straight a reality show in which one woman spent time with a group of men.

Besides that, Jameela Jamil is also being a regular cast member of the NBC fantasy comedy series The Good Place, where she plays Tahani Al-Jamil, alongside Kristen Bell and Ted Danson. Whereas, Jamil’s character became known for her tendency to name drop.

Additionally, she made her first American magazine cover in the February 2018 edition of The Cut. In fact, Jamil provided her voice as a guest on the animated television series DuckTales. During 2018, Jamil also joined the cast of Disney’s Indian-inspired cartoon set in fictional Jaipur.

Talking about her awards, a nomination she was nominated for the Best Television Series – Musical or Comedy at the Golden Globe Awards. But she has not yet won any of the awards.

As of 2022, she has an estimated net worth of around $3 million which she has earned from her professional career.

She has not been involved in any notable controversies or rumors in her career. This television personality has maintained a positive image between the public and the media.

Recently, she slammed Kim Kardashian for her body corsets.

Jameela Jamil explains about her ongoing feud with the Kardashians and her I Weigh campaign!