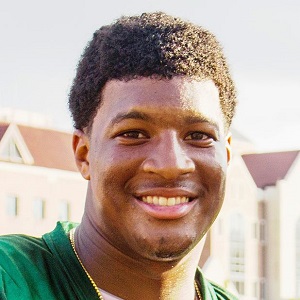 Jameis Winston is in a relationship. He is having an affair with Breion Allen. He is also engaged to his longtime girlfriend. The couple engaged in May 2018. While their engagement, Breion was pregnant.

They are high school sweethearts in Birmingham, Alabama and were dating since then. Moreover, they had their first baby named Antonor born in July 2018 and its a boy.

Who is Jameis Winston?

Jameis Winston is an American football player. He currently plays as a quarterback for the Tampa Bay Buccaneers of the National Football League (NFL). He played college football for the Florida State Seminoles. Jamies is the youngest player to win the Heisman Trophy. He helped lead the Seminoles to a victory in the 2014 BCS National Championship Game.

Winston was born on January 6, 1994, in Bessemer, Alabama, USA. He is the son of Antonor Winston and Loretta Winston. His nationality is American and he is of African-American ethnicity. He attended Hueytown High School, where he played both football and baseball.

He committed to attend Florida State University on February 3, 2012. After that, he played at Florida State Seminoles. He won the 2014 BCS National Championship Game with the Seminoles. The Texas Rangers selected Winston in the 15th round of the 2012 Major League Baseball Draft out of high school.

Winston chose Florida State in part because he was allowed to play for the Florida State Seminoles baseball team in addition to football. In the 2013 season, he was named a preseason All-American by Baseball America as a 3rd-team utility player.

Jamies began playing football professionally in 2015. The Tampa Bay Buccaneers took Winston first overall in the 2015 NFL Draft. On May 1, 2015, he signed a four-year, $23.35 million contract with the Buccaneers, with a $16.7 million signing bonus.

The contract prevents him from playing any other sport than football. He played his first regular season game against the Tennessee Titans. In the 2016 Pro Bowl, he was selected to his first Pro Bowl game and became the first rookie quarterback in Buccaneers’ history to be selected.

In the midst of his remarkable freshman season, the NCAA began an investigation to look into a sexual assault charge filed against Jamies in December of 2012.

In 2012, Winston and another FSU player were held by campus police for allegedly bringing a BB gun on campus and firing at squirrels. Officers handcuffed Winston, but he was later released when it was noticed he was not on campus and the gun was just a BB gun. No charges were filed against Winston in this incident

In July 2013, a Burger King employee called police in July to complain that Winston was stealing soda. On September 17, 2014, Winston was suspended for the first half of Florida State’s upcoming game against Clemson for his Vulgar comments.

He has a height of 6 feet 4 inches with body weight 105 kg. He has black hair color and his eye color is dark brown.