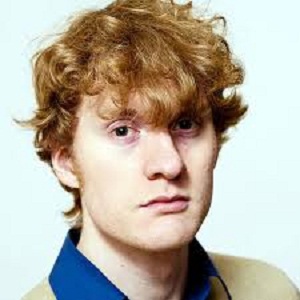 People like abstract art because it makes them feel clever

I absolutely loathe sleeping in a tent, regardless of the weather

I'd say I get heckled quite a lot because I look quite like an easy target. If you're an alpha-male and you think you've got something to prove to your girlfriend, I think I'm the perfect person to prove your worth.

What is the relationship of James Acaster?

Previously, he was in a romantic relationship with comedian, Rose Matafeo.

The couple first met on the comedy circuit in New Zealand.

The news of their split was revealed by James. He said that she left him.

Who is James Acaster?

James Acaster is an award-winning English comedian. Acaster is also an actor and author. He is best known for his act, Prompt.

Currently, he is on a tour, The Trelogy.

James Acaster was born on 9 January 1985, in Kettering, Northamptonshire as James William Acaster. He has a sister.

He is of Caucasian heritage.

Acaster attended Montagu Secondary School in Kettering and went on to study music at Northampton College.

He is active in the entertainment field since 2008.

In 2009, he performed in a show at the Edinburgh Festival Fringe and supported Josie Long on tour in 2010.

In 2011, he supported Milton Jones on tour and appeared on Russell Howard’s Good News.

His career took on a successful path when he appeared in the 2012 act Prompt which was nominated for an Edinburgh Comedy Award.

In 2013, he appeared in the Edinburgh show “Lawnmower” at the Pleasance Courtyard.

Acaster was also involved in musical bands before he became a stand-up comedian. He also co-hosted a radio program called My First Gig.

He won the Chortle Awards for Best Breakthrough Act and Best Show for Recognise in 2015.

In 2014, he won the Best International Show at – New Zealand Comedy Festival.

James Acaster was criticized as the Leonardo DiCaprio of British stand-up.

He has red hair with brown eyes. His height and weight are unknown.