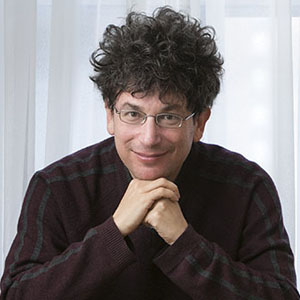 The American Dream never really existed. It was a marketing scam

It's hard to know which stars in the sky will turn into black holes. And which ones will open up worm holes into entire new universes

Every day, you reinvent yourself. You're always in motion. But you decide every day: forward or backward.

James is married twice in his life. Currently, he is married to Robyn Samuels. Robyn is renowned as the aunt of Florence Welch, who is one of the band members of the rock band, Florence and the Machine. The couple exchanged the vows in 2019. His current wife Robyn was a widow since 2015 and from her previous marriage, she has three children.

James and his first wife got divorced after they had two children. His divorce was done mutually by him and his wife without hiring any lawyer.

He was previously married to Claudia Azula Altucher.

James is currently living in New York with his wife, Robyn, and children: Josie, John, Sarah, Lily and Mollie.

Who is James Altucher?

James Altucher is an American hedge fund manager, entrepreneur, bestselling author, venture capitalist, and podcaster. He is the founder and co-founder of more than 20 companies some failed and some were sold. James is highly known for inspiring people through various event and social media.

James is a frequent contributor to publications including TheStreet.com, TechCrunch, Seeking Alpha, Thought Catalog, The Financial Times and The Huffington Post.

James Altucher was born on January 23, 1968, in the United States. His nationality is American and ethnicity is unknown. There is no information on his parents, siblings or childhood.

James, after his graduation, worked for HBO in the IT Department. While working in the IT Department he also hosted a program for HBO, III: Wu Tangam, interviewing local residents the late nights in New York. In 1996, James started a web-design firm, Reset Inc. which was at the start of his entrepreneurial career. His client was Wu-TangClan, American Express, Con Edison, Time Warner, and BMG.

Later James sold his firm for approximately $10 million. James also left his job in HBO to start new internet investments at $15 million but lost all in near about two years.  Later Jim Cramer of TheStreet.com hired him to write about stocks and traded for many hedge funds. He also ran a fund for hedge funds. Now he is M.D. of an asset management firm Formula Capital. James also has investment including bit.ly, Ticketfly, Acebucks, Cancer Genetics, and Optimal. He was also a seed investor in Buddy Media, later sold to Salesforce.com.

James has written many articles for The Street.com, Seeking Alpha, and Daily Finance and was a weekly columnist for The Financial Times. He is the regular face on CNBC. James is on the top list of 100 most Influential Business Journalists. He also runs podcasts, he interviews entrepreneurs, public figures, comedians on his weekly podcast. James has 3 podcasts running now.

James is also a writer and has written 17 books including I Was Blind But Now I See which reached No. 1 in Amazon.com’s motivational books section. His writing can be accessed on Financial Times, Wall Street Journal, TheStreet.com, Forbes, Yahoo Finance, TechCrunch, ThoughtCatalog, and Fidelity.com. In 2010 James launched his blog hit 5 million views in the first year. His book Choose Yourself was stated as the 12 Best Business Books of All Time by USA Today.

This multi-talented personality has huge earning from his different professions. As per the sources, he has accumulated a net worth of around $50 million.

James was on controversies when he spoke about the US Presidency that we don’t need one. Secondly, he was in controversy when he said Google might be headed for $0 because their 97% revenue comes from Adsense and Adwords and if it stops they might fall down.

James Altucher has dark brown hair and dark brown hair. Furthermore, there are no details regarding his body measurements. Also, his body weight and height are not known.