James Devoti is currently romantically connected to an actress named Elizabeth Ariasto. She made her appearance in shows like The Neighborhood and Elementary.

They seem to be enjoying their togetherness. James has uploaded her photos on his Instagram account. Moreover, he is fond of dogs and owns a dog named Pablo. 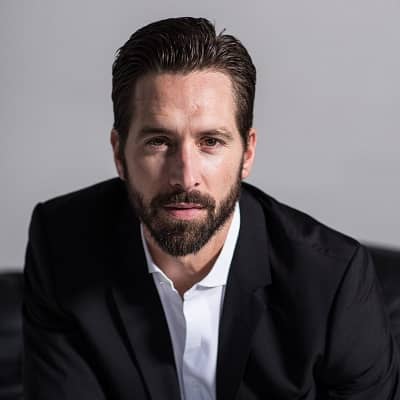 Who is James Devoti?

James Devoti is an American actor who is best known as Brooks Donald on ‘American Soul’. Furthermore, he is also popular for his role in the tv series, The Walking Dead.

He is the son of Robert Devoti and Barbara Devoti. Likewise, his father was a sniper with the United States Marine Corps in Vietnam. Sadly, he passed away due to lung cancer when James was only thirteen years old. Therefore, he was raised by his single mother who was a retired teacher and a Hall of Fame inductee for the Massapequa public school district.

Similarly, he has an elder brother, John Devoti who served in Afghanistan in 2004 and Iraq in 2008. Currently, he is a Lt. Colonel in the United States Marine Corps. James and his brother are very grateful to their mother who raised them with care. Sadly, their mother passed away in 2021.

He has an American Nationality and his ethnic background is Caucasian.

Furthermore, he graduated from Loyola University with a BA in Communications/Advertising with a Minor in Business. During his collegiate days, he competed on the Loyola Greyhounds Men’s Lacrosse Team. He also made it to the Final Four.

Prior to his movie appearance, James appeared in a commercial for Wrangler starring former football player Drew Brees. He also appeared in an ad campaign for Nissan. After traveling to West Africa, he first appeared in his first tv series ‘Law & Order: Criminal Intent’ in 2004.

Later, he appeared in several tv series and films such as Heroes, CSI: NY, Lake Dead, The Unit, Jericho, Lie to Me, Modern Family, Rules of Engagement, and Bones. He gained fame and recognition as Landon in the TV soap The Young and the Restless in 2011. Furthermore, he was seen in ‘American Soul’, ‘Beauty and The Beast’, and ‘The Walking Dead’ among others.

James has not won any awards till now but he might win some in the future.

Devoti has not revealed his salary and there is not much information about his net worth too.

As for now, he is living his life quite simple and uptight. He has a low-key profile. Therefore, there are no rumors and controversies about him.

Devoti is a handsome and bold guy with a charming personality. Likewise, he has a tall height and weighs moderate which suits his athletic body type. He has blonde hair and brown eyes.

Brother found guilty for sexually abusing sister; Sister confronts her rapist ‘It Was Sexual Abuse, It Was Not Curiosity’