Played college football at Kent State University. He later signed with the Steelers as an undrafted free agent in 2002.

There is no detailed information regarding the future of the relationship. 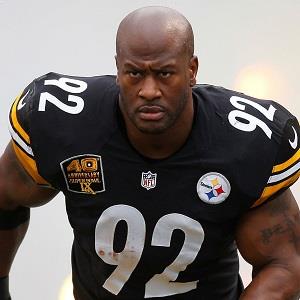 I was sitting at home looking for a job, a real job, not a football job. I was giving up on this.

Who is James Harrison?

James Harrison is an American football linebacker for the Pittsburgh Steelers of the National Football League (NFL). Previously, he played college football at Kent State University. He later signed with the Steelers as an undrafted free agent in 2002.

Harrison was born in Akron, Ohio on May 4, 1978, as the youngest of 14 children to James Sr. (a chemical truck driver) and Mildred. He became interested in the world of football in his childhood years. He is of American nationality. Furthermore, he belongs to an African-American ethnic background.

Talking about his education,  Harrison attended  Archbishop Hoban High School and Coventry High School. Later, he attended Kent State University and walked on the Kent State Golden Flashes football team. Additionally, he became a starter for the last three games of the 1999 season and led the team with 106 total tackles and 13 tackles for a loss.

Harrison went undrafted in the 2002 NFL Draft. In addition, he spent two years on and off the practice squad for the Steelers. He was signed by Baltimore in late 2003, then sent to the Rhein Fire of NFL Europe, but eventually was cut by the Ravens. Throughout the 2004 season, he mostly played on special teams and on defense at linebacker, with occasional reps at defensive end. He later started three games of the 2005 season.

Harrison was appointed as the starter in the 2007 season. On November 5, he had a standout game on Monday Night Football against the Baltimore Ravens. Furthermore, he was voted team MVP for the 2007 season. During 2008, in the Steelers Week, 4 Monday Night Football game against the Baltimore Ravens. On January 5, 2009, Harrison was named the AP NFL Defensive Player of the Year for the 2008 season.  In Super Bowl XLV, Harrison recorded a sack on Aaron Rodgers but lost 31–25 to the Green Bay Packers.

Harrison signed with the Cincinnati Bengals on April 23, 2013. However, on March 13, 2014, he was released by the Bengals. Harrison announced his retirement on August 30, 2014, and officially retired as a member of the Pittsburgh Steelers on September 5, 2014. Later, he officially signed with the Steelers on September 23, 2014. On February 17, 2016, he announced that he would be returning for a 14th season with the team. Eventually, on March 1, 2017, Harrison signed a two-year contract extension with the Steelers.

Harrison was named the AP NFL Defensive Player of the Year for the 2008 season, beating out Cowboys linebacker DeMarcus Ware for the award. His current salary is $2,700,000 with the Pittsburgh Steelers. As of 2022, he has an estimated net worth of around $12 million.

Harrison became part of a controversy after he was arrested in March 2008 and was charged with simple assault and criminal mischief stemming from a domestic altercation with his girlfriend, Beth Tibbott.

Additionally, the arrest gained some controversy after the team released wide receiver Cedrick Wilson in a similar, but unrelated, incident around the same time but did not release Harrison.

Furthermore, his answers to the Men’s Journal article also stirred numerous controversies along with his ways. At present, there are no rumors concerning Harrison and his career.

Talking about his body measurement, Harrison has a height of 1.83 m. Additionally, he weighs around 125 kg. Furthermore, his hair color is black and eye color is dark brown.