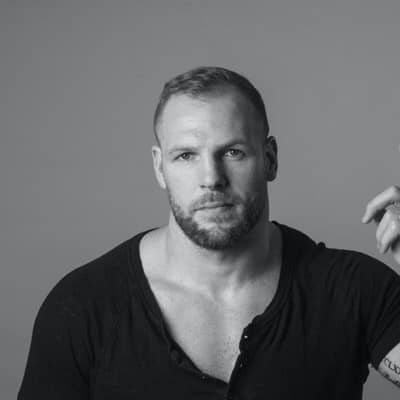 What is James Haskell's Relationship Status?

James Haskell is a married man who enjoys spending time with his family.

Who is Married to James Haskell?

James Haskell, a retired former rugby player, married TV presenter Chloe Madeley. The couple has been dating since 2014 and has a very romantic relationship. In 2018, they also exchanged vows and married each other. After marrying, they announced on Good Morning Britain in 2022 that they were expecting a baby girl.

How many children does James Haskell have?

On August 16, 2022, the couple welcomed their baby girl. They have also revealed the name of their child which is Bodhi Rae Georgia Haskell. They have shared many beautiful pictures of their daughter on their Instagram.

Who is James Haskell?

James Haskell is a well-known former British Rugby Union player. He has played in the Aviva Premiership for Wasps RFC and Northampton Saints for his birth country England. He hosts The Good, The Bad, and The Rugby Podcast with Mike Tindell and Alex Payne. As an author, he has also written the book What A Flanker.

James Haskell also declared his intention to become a professional mixed martial artist and signed with Bellator MMA. He was given the opportunity to compete in the Heavyweight division. He also appeared on the nineteenth season of I’m A Celebrity… Get Me Out of Here! in 2019.

James Haskell, full name James Andrew Welbon Haskell, was born on April 2, 1985, in Windsor, Berkshire, England. He was born and raised in Berkshire. He has British nationality and is of white ethnicity because he was born in England.

His father and mother are Jonathon Haskell and Susie Haskell. Despite the fact that he has shared his parents’ names, there is no information about their occupation. He also spent his youth with his younger brother, Edward.

James Haskell’s almost childhood as well as his youth was spent in Berkshire. As he started attending Papplewick School in Ascot. After finishing school, he enrolled at Wellington College in Crowthorne. Despite the fact that he has graduated from college, no information about his major is available.

James Haskell has spent his rugby career representing his country’s various leading teams in cities such as London, Paris, Japan, and New Zealand. He has become one of the most experienced members of the England squad as a result of his efforts. Before he became famous, Haskell represented England in under-18, 19, and 21 rugby matches.

Before James joined the Wasps RFC, he played for Maidenhead Rugby Club where he was part of the highly successful Colts setup. James joined Wasps as a replacement after they won the 2007 Heineken Cup Final.

He joined the Top 14 club Stade Francais at the end of the 2008-09 season. After several years of playing for England’s teams, the rugby player’s career was taking off. Martin Johnson chose James for the 2008/2009 Elite Player Squad in July 2008.

James appeared in all three autumn internationals, beginning with a match against the South African team. Despite losing his starting spot to Tom Croft, James Haskell played in every game of the 2009 Six Nations. At the end of the 2010-2011 rugby season, it was announced that his two-year contract with Stade Francais had expired.

Haskell was eager to join the Highlanders in Super Rugby in 2011. He stated that he enjoys playing in new environments because it allows him to improve his skills and become a better player for his country. He was set to rejoin the Wasps for the 2012-2013 season.

James was benched in Stuart Lancaster‘s 31-man squad for the 2015 Rugby World Cup in favor of Tom Wood. England did not advance past the group stages that year.m During England’s 3-0 series victory over Australia in June 2016, James Haskell was named ‘Man of the Series.’

Because of Billy Vunipola‘s injury, James was called up to the British and Irish Lions in May 2017. James announced his departure from Wasps at the end of the 2017-2018 Aviva Premiership season in January 2018. Following the World Cup, James Haskell played for the Rams in Japan for the following rugby season before seeking a Super Rugby contract to finish the season.

Earlier in May 2019, James Haskell announced his retirement from professional rugby in an Instagram post after several years of playing for clubs around the world and for his country.

In 2019, James Haskell signed with the mixed martial arts promotion Bellator MMA. He also announced in 2020 that he would make his professional mixed martial arts debut on May 16, 2020, but this was postponed due to a covid outbreak. He also had spinal surgery in September 2021 and decided to retire from MMA.

James Haskell also appeared in the ninth season of I’m a Celebrity… Get Me Out of Here! He was the fourth person to be voted out.

James Haskell has been suspended because he was involved in the Sex Tape Scandal while attending Wellington College. Despite being suspended for this later in 2019, he made light of the incident in a YouTube podcast, saying, “All I’m going to say is this.” ‘It was my idea, Paul executed it, and I had nothing to do with it except, obviously, it was my idea.’

In 2011, he was accused of sexually abusing a hotel worker alongside England players Dylan Hartley and Chris Ashton.

James Haskell has kept his body in such good shape that it appears he is a fitness freak. He has a muscular body type. He stands at 6 feet 4 inches tall and weighs 118 kilograms. Despite sharing his height and weight, there is no information about his physical measurements such as hips, waist, and bicep sizes. On the outside, he appears to have brown hair and brown eyes.

James Haskell, like other celebrities, is active on social media. He is an active Instagram user, with 546k followers and 4451 posts. On his Instagram, we can see that he has posted photos of himself enjoying his concerts, spending time with children, and doing many other activities. He recently shared a video of his new song promoting @wearlovejuice. James Haskell has also been active on Twitter since March 2009. He has a large number of Twitter followers, with nearly 202.3k followers and 24.5k tweets.

James Haskell is also on Facebook, where he has 176k followers, and he has shared many videos of him enjoying his concerts and the love he has received from his fans. He also has a Tiktok account, James Haskell, with 27.9k followers and 183.9k likes. James received millions of views for his TikTok videos. He also has an 86.6k subscriber YouTube channel.

US Soccer players Zach Ertz and Julie Ertz are Parents to a Baby Boy!