James Hinchcliffe, an IndyCar racer who also was one of the contestants of the 23rd season of ABC's Dancing with the Stars. James is engaged and off the market since 2018. 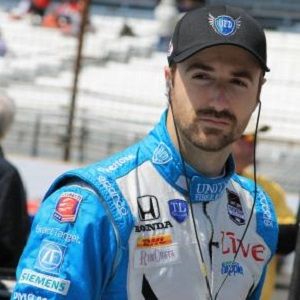 Some cool stuff happening this week for both of us! Acting stuff, racing stuff, Stop&

James Hinchcliffe is currently engaged to Becky Dalton. On 23rd July 2018, James posted on his Instagram handle that he proposed to her and she said Yes in a hilarious way.

He captioned the picture,

Wait, what?! I thought they said “til DEBT do us part”! #BeckyGetsHinched

On the picture, his girlfriend turned fiance, Becky had a shocking expression and was showing off the ring.

Who is James Hinchcliffe?

James Hinchcliffe is a race car driver who hails from Canada. He is best-known and recognized competing in the IndyCar Series along with the team, Schmidt Peterson Motorsports.

Also, in 2016, he was the second runner up of ABC’s Dancing with the Stars.

James Hinchcliffe was born on December 5, 1986, in Oakville, Ontario, Canada. He is of Canadian Nationality and Anglo-Saxon ancestry.

His father is Jeremy Hinchcliffe and his mother is Arlene Hinchcliffe. He spent his early life and childhood along with his two siblings named Christopher Hinchcliffe, brother and Rebecca Hinchcliffe, sister. Since a very young age, he developed a keen interest in the sports car.

Talking about his education and qualification, he completed his earlier schooling from Oakville Trafalgar High School. After that, he continued his further studies from McMaster University.

James Hinchcliffe started his career as an open-wheel racer in karting in the year of 2003. He also started car racing after he achieved 3rd in Bridgestone Racing Academy F2000 series in the same year.

In the following year, he was able to become the top rookie in Formula BMW USA by winning three races. Later on, he ended 3rd overall with 3 wins in the Star Mazda Series in the year of 2005. After that, he competed in the Champ Car Atlantic Series in the year 2006. He finished 10th in overall standings.

Besides racing, he also served as an analyst for the Eurosport coverage of Champ Car events in 2006 as well as 2007 seasons. Later on, he joined A1 Team Canada in A1 Grand Prix.

Furthermore, he signed to race in Indy Car Series season, excluding the Twin Ring Motegi Race April 9, 2017. In 2016, he was appeared in a dancing reality show Dancing With The Stars S23.

As a result of his successful career as a car racer, he amassed a lot of fortune and fame. As of now, his net worth is estimated to be $3 million, with his salary is $1 million annually.

James has always been passionate about racing and car since his young age. He has never in any incidents which could hamper his career. also, he is very careful in his actions which kept him away from rumors and controversy.

James Hinchcliffe has an average body structure. He stands at a tall height of 5 feet and 9 inches and weighing 71 kg. Moreover, he has dark brown colored eyes and dark brown hair.

James is popular as well as followed in different social media and has his own website.

Is James Hinchcliffe already married or still dating? Speculation are that he’s in relationship affair with Rebecca Becky Dalton