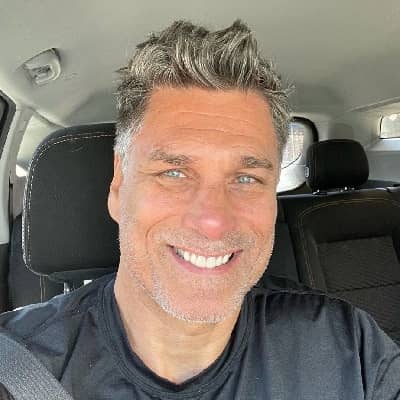 I've done nude scenes in the movies. You've got to feel comfortable with yourself or you're going to have a hard time in this business.

James Hyde is a married man. He tied the knot to Sue-Ling Garcia in 1994. Together the couple has a son named James Moses Hyde born in 2004. currently, James resides in Los Angeles, CA with his wife and son.

Who is James Hyde?

James Hyde is an American renowned actor, dancer, and fashion model. He came into the limelight of the media after appearing on Passions in the role of Sam Bennett. Presently, he works as a realtor for Pacific Union Los Angeles.

The actor was born on the 9th of October 1962 as James Robert Hyde. He hails from Lancaster, Ohio, U.S. He holds an American nationality unfortunately his ethnicity is Caucasian.

After high school, James joined the military and then he was discovered by a modeling agent in Hawaii. He worked with top designers and appeared in various magazine covers including Bazaar Uomo. In 2002, he posed for the cover of Playgirl Magazine.

In 1996, he auditioned for an open casting call competition for Sunset Beach aired on NBC where he won and featured in the soap opera’s promos. In 1997, he starred in the role of Neil Johansson on the television series Another World. Similarly, he was cast on NBC’s soap opera Passions where he portrayed the role of Sam Bennett.

He also appeared in a minor role as Liam on the television series, As the World Turns in 1999. Furthermore, he made an appearance on the short-lived TV series, Mortal Kombat Conquest as a friend of Taja’s.

Hyde toured in Japan and the US with the British new wave band Dead or Alive as a dancer which was fronted by singer Pete Burns in 1987, 1989, and 1990. He was also one of the two dancers in the concert film Rip It Up Live.

To date, he doesn’t involve in any kind of rumors and scandals that create a huge buzz in the media. Also, he prefers to keep a lowkey profile.

As per other online sources, Hyde has an estimated net worth of around $1 million to $5 million throughout his profession as an actor. Further, his salary, yearly income, and other assets are still under review.

The actor has an athletic body figure with a brown complexion. He stands at the height of 6 feet 1 inch tall and he has average weight.

However, the actual measurement of his weight is not available. Further, he has grey hair with a hazel blue pair of eyes color.