James Rousseau isn’t engaged in any relationship. He hasn’t talked anything regarding his officially or seen dating anyone currently.

James was in a relationship with a fellow supermodel Ana Beatriz Barros in 2003.

After that, he dated actress Kate Bosworth in September 2006. The couple often has public appearances together. However, the pair separated in 2009.

Then James was in a relationship with Annabelle Wallis from 2010 to 2014. 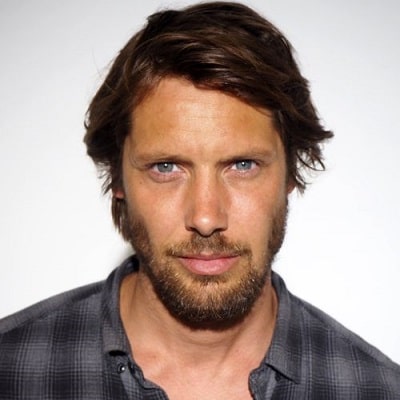 Who is James Rousseau?

James Rousseau is an English actor, and supermodel who turned into a singer/songwriter.

He is popular for his song, “To Make you Mine”. James Rousseau has worked for various modeling agencies including  Elite Copenhagen, View Management Barcelona, Select Model Management London, The Face Paris, and also Wilhelmina New York.

The model came more into the limelight after dating actress Kate Bosworth in 2006.

James was born on 19th December 1980, in Ashford, Kent, UK.  His full name is James Rousseau Osborne. He is of mixed ethnicity (Swiss, French, and English).

He grew up in the Herefordshire village of Much Marcle in the countryside of the English midlands. The village is popular as the family home of the serial killer Fred West.

Moreover, he belongs to the family of Jean Jacques Rousseau who is the philosopher whose writings actually influenced the French revolutionary movement.

James shares that he was influenced into music by his mother. He hasn’t revealed his parents’ names although.

James has his schooling at Abberley Hall Preparatory School. He then attended one of the top UK independent schools, Malvern College in Worcestershire. As well as achieving a good academic result in one of the top British universities, he also starts his career in modeling.

James Rousseau is one of the few students who were qualified to train at the Stella Adler School of Acting in New York.

James Rousseau started modeling from a young age. After high school, he was working on a holiday job for painting and decorating in London. There someone suggested he into modeling and he went to the nearest agency there.

He visits  Select Models agent and receives his selection in 1997. No sooner, he landed with various opportunities and slowly moved toward big campaigns. Moreover, James receives a chance to work with Steven Meisel in New York for Italian Vogue.

His career breakthrough was working for Mui Mui for an inaugural campaign. Within two years, he was one of the internationally known models. In 2008, he was in a spring ad campaign for Gap. James is currently fronting a UK campaign for House of Fraser.

In the year 2015, James appears in The Bastard Executioner.

The model has earned a net worth of around $500,000 from his career. He has worked for various branded companies and must receive a good salary. His salary is still unknown.

James Rousseau is always focused on strengthening his career. He hasn’t been involved in any such activities causing any rumors and scandals in the media.

James Rousseau stands tall at a height of 6 feet and 1 inch. His hair color is light brown and his eyes are of blue color.