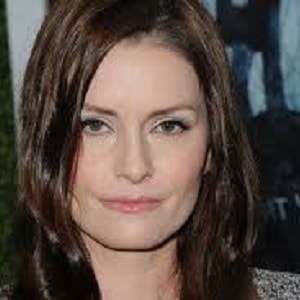 I think it's really amazing to have a big family. I've always wanted one.

I've always played way older than my age. It's the experience behind my eyes or something.

In every role, a part of me gets to come out.

Jamie Anne Allman is a married woman. She has been married to Marshall Allman, an American actor from June 17, 2006. The couple has welcomed three children. They welcomed twins; Asher James Marshall and Oliver Charles Marshall on January 31, 2013. And, they welcomed their 3rd child, June Joanne Allman on May 21, 2014. June was born a few weeks premature.

She was diagnosed with gestational diabetes when she was pregnant with her twins and she had to spend months on bed rest due to the shortened cervix. The bladder infection led to the premature delivery and the twins were admitted to the NICU 81 days premature.

Who is Jamie Anne Allman?

Jamie Anne Allman is an American actress. She is best known for her role as Terry Marek in AMC’s ‘The Killing’. She is also well recognized for her role in the romantic drama ‘The Notebook’ in the year 2004.

She was born on April 6, 1977, in Parson, Kansas, USA. She is currently 42 years old. Jamie is the oldest of five children of her parents. However, she has not revealed her parent’s name.

She had a dream to become an actress since her early ages and she moved to Los Angeles in order to pursue her childhood dream.

Jamie holds American citizenship but her ethnicity is unknown.

Talking about her education history, she took acting classes at Playhouse West in Los Angeles.

Jamie Anne Allman started her acting career from the role of Kassidy’s Dresser in the 1999 movie ‘Fashionably L.A.’. She appeared as Bree Davis in the TV series ‘The Fugitive’ by the following year.

She starred as Iris in the film ‘It Is What It Is’ in 2001 and appeared as Michelle Trotter in ‘The Practice’, as Chloe Frye in ‘Family Law’ as Noelle Burnett in ‘NYPD Blue’, and as Sharon in ‘Bosotn Public’.

It seems Jamie has not been so successful in collecting awards and nominations in her profession till date. hope, she will win in the future.

She has an estimated net worth of around $500,000 and she has earned that sum of money from her professional career.