Famous after his roles as Anthony Hope in Sweeney Todd: The Demon Barber of Fleet Street, Caius in The Twilight Saga, King Arthur in the Starz series Camelot. 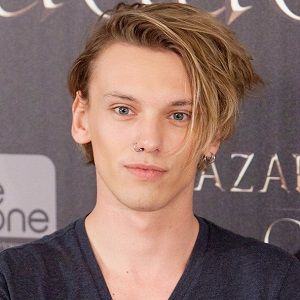 Jamie is an unmarried man. However, he has been dating several beauties to date. Back in 2007, he was in a relationship with Zoe Graham. The pair maintained their relationship for a couple of years and then broke up. Soon after breaking up with Zoe, he began dating Bonnie Wright for almost three years from 2009-2012.

Jamie and Lily Collins affair took the spotlight as they began dating in 2012. The beautiful couple was spotted many times together spending some gorgeous time together. Although, they couldn’t handle their relationship for too long and broke up after three years in 2015. In addition, Jamie has also dated Zina Charkoplia in 2013 and Matilda Lowther in 2014. Recently, there were also rumors that Jamie and Lily are getting back together. Currently, the pair has spotted several times together.

Who is Jamie Campbell Bower?

Jamie Campbell Bower is a British actor, singer, and model.

He became famous after his roles as Anthony Hope in Sweeney Todd: The Demon Barber of Fleet Street, Caius in The Twilight Saga, King Arthur in the Starz series Camelot.

Furthermore, his notable works also include Gellert Grindelwald in Harry Potter and the Deathly Hallows – Part 1, Jace Wayland in The Mortal Instruments: City of Bones.

Besides his acting career, Jamie is also the lead vocalist, guitarist, and founding member of Counterfeit.

He is the son of a music manager mother Anne Elizabeth and father David Bower, who works for the Gibson Guitar Corporation. From the beginning of his childhood, the British singer had a keen interest in acting and singing.

Talking about his education, Jamie joined Bedales School, which was a co-educational independent school in Hampshire.

Jamie began his acting career from the 2007 movie Sweeney Todd: The Demon Barber of Fleet Street as Anthony Hope. After gaining huge recognition, he appeared in two movies in 2008 RocknRolla and Winter in Wartime.

Furthermore, he has also acted in the popular 2009 movie The Twilight Saga: New Moon as Caius Volturi. Moreover, his other notable role was in the Harry Potter and the Deathly Hallows – Part 1 in which he delivered the character of Young Gellert Grindelwald. Additionally, he has also featured in several movies which include Anonymous, The Twilight Saga: Breaking Dawn – Part 1 and Part 2, and a few more.

Besides this, he has also appeared in a couple of television series such as The Prisoner, Camelot, Thomas & Friends, and Will.

In 2015, he also featured Joe in Bend It Like Beckham. Apart from that, Jamie is also the lead vocalist, guitarist and founding member of Counterfeit which was formed in 2015 in London, United Kingdom.

Being a famous singer and actor, Jamie earns a handsome amount of money from his profession. Currently, he has a net worth of $3 million.

After breaking up with Lily Collins, there were rumors that they’re getting back together. They were recently spotted hanging out and enjoying each other. Besides this, he has not involved in any type of controversy to date.

Jamie has a height of 6 feet and weighs 75 kg. Furthermore, he has gorgeous blue eyes and blonde hair. Additionally, his other body measurements include 37 inches chest, 28 inches waist, and 12 inches arms.