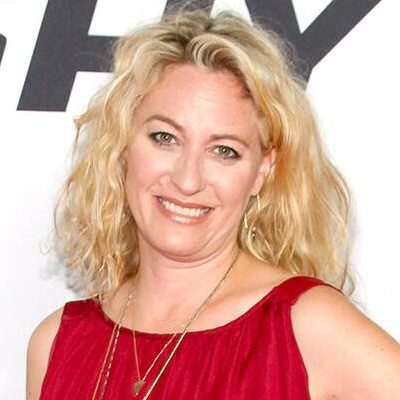 Jamie Denbo’s husband is non-other than, John Ross Bowie. He is also an actor by profession. The wedding took place on the 5th of June 2004.

Together, they have two children including a daughter, Nola, and a son, Walter.

Who is Jamie Denbo?

American Jamie Denbo is a TV actress, podcaster, and comedian. She is renowned for as co-host of the podcast, Ronna and Beverly.

She is also the writer and producer of American Princess. Last, in 2019, she appeared in Bajillion Dollar Propertie$ as Beverly.

Jamie Denbo was born on the 24th of July 1973 in Boston Massachusetts. She is of Jewish ethnicity.

Her father is from New Jersey whereas her mother is from Montreal. She happens to be the only child of her parents.

She completed her primary education from Jewish day School. During summer breaks, she used to spend her time in Camp Tel Noar in Hampstead.

Later, she joined a college at Boston University. At the time, she also joined improvisation theatre.

Jamie Denbo first started acting through the plays during her summer camps. Eventually, she started liking it and pursue it as her career.

In 1997, she debuted with the industry with the movie, Last Night at Eddie’s as Allison. However, she expanded her career towards TV rather than movies.

As of now, she has made her appearance in the TV series more than 70 series. Some of her series include The Life & Times of Tim, Orange Is the New Black, and F Is for Family.

Moving forward, in 2003, she expanded her career as a writer with the movie, Felicia and the Great Quebec. Later, in 2009, she contributed her script with the movie, Ronna & Beverly. From the movie, she started her production career too.

Last, she became the executive producer of the American Princess. Also, she is a writer of the series.

She is famous for her podcast, Ronna and Beverly where she embodied the character of Beverly Ginsberg along with Jessica Chaffin (a.k.a Ronna Marlene Glickman). The podcast ran in the Earwolf network till 2017 starting from 2011.

Last, on the 11th of March 2019, she launched the spinoff podcast, Beverly In LA on Stitcher.

Besides that, as a podcaster, she makes in the range of $87k or above. Apart from that, as a writer, her salary is $28k to $91k. Also, she earns through her production works too.

Her husband, John has an estimated net worth of $3 million.

As of now, she has not been through any sort of controversy that created a buzz in the media. Similarly, there are n rumors related to her.

Jamie Denbo is a blue-eyed blonde. However, she prefers to experiments with her hair colors. Her height is 5 feet 5 inches and has a decent weight.