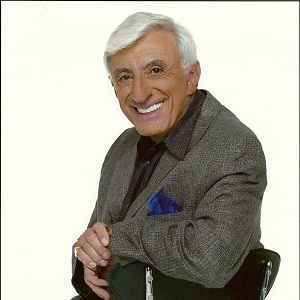 The benefits from stardom as Klinger outweigh any setbacks. It's a double-edged sword. What makes you famous is what interferes with getting other roles. But there are things that never would have happened without M*A*S*H (1972). There certainly would be no Jamie Farr Kroger Golf Classic.

Who is Jamie Farr?

Jamie Farr is a Popular American actor, known for his popular show MASH (1972), The Cannonball Run (1981) and Scrooged (1988). Farr is currently the oldest surviving cast member of MASH.

The birth name of Jamie Farr is known to be Jameel Joseph Farah and he was born on July 1, 1934, in Toledo, Ohio, USA. His parents are Jamelia M. (née Abodeely), a seamstress, and Samuel N. Farah, a grocer. He along with his family visit Saint George Antiochian Orthodox Church in Toledo.

By the time Farr got graduated from Woodward High School with honors. He was entitled as an outstanding student. He was extremely popular and active in numerous extra-curricular activities during his school life. Besides reading and acting in two different shows, he was known to be a member of the Drama Society, class president for three years, feature editor of the school newspaper, president of the radio class, manager of the football and basketball teams and a member of the varsity tennis team.

The records of his higher education are not available at this moment.

Farr’s success started at the age of 11 when he won two dollars in a local acting contest. After Woodward High School, Farr attended the Pasadena Playhouse, where a Metro-Goldwyn-Mayer talent scout found a talent in him offering a screen test for Blackboard Jungle.

Farr did his first movie titled The Blackboard Jungle in the year 1955, and shortly he was called for a Broadway production of No Time for Sergeants, just before he was drafted. For local children’s charities, he organized an annual women’s professional golf tournament on the LPGA tour, the Jamie Farr Toledo Classic, presented by Kroger, Owens Corning, and O-I in Sylvania, Ohio since 1984. He played the role of the co-pilot of a TB-25 in the Andy Griffith military comedy No Time for Sergeants, which also brought the young TV comic Don Knotts to motion pictures by  Warner Brothers in 1958.

The momentum of Farr’s career was upset for two years in the Army, and he found himself from 1958 through 1971 rebuilding himself from the ground up in bits and supporting roles. Farr playing opposite his old friend William Christopher in the role of Felix Ungar went on a national tour with The Odd Couple, playing Oscar Madison from 1996 to 1997.  The $250,000 Game Show Spectacular was organized by Farr, Chuck Woolery, and Bob Eubanks at the Las Vegas Hilton until the show ended in April 2008.

One of Farr’s one-day succeed was for the sixth episode of the new TV series M*A*S*H in 1972. Farr’s role was expanded when Gary Burghoff left M*A*S*H in 1979. Since Klinger began to thrive in the military, he got promoted to company clerk, and the outrageous costuming was allowed to lapse. By the time M*A*S*H, Jamie Farr had become a true-blue celebrity.

In 1975 he was nominated for golden apple award for a female new star of the year. And in 1985 he was selected as the winner star on the walk of fame for the television show at Vine Street on 10th may.

Jamie Farr: Salary and the Net worth

Jamie Farr, an American actor has a net worth of $6 million dollars. The information about his salary is not available.

Many people enjoy sharing rumors about the sexuality and sexual orientation of celebrities. 22% people think Jamie Farr is homosexual but actually, he is straight.