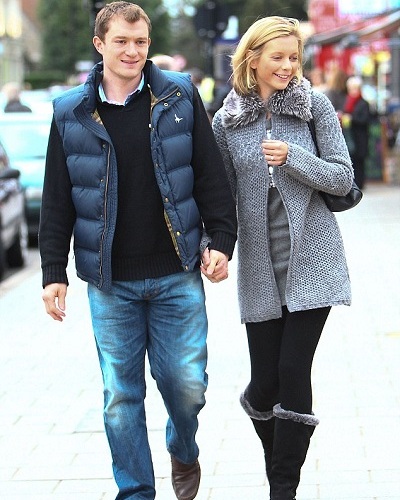 Jamie Gilbert is a British businessman and the ex-husband of TV host Rachel Riley. A lot has been spoken and written about Rachel who is the host of The Countdown show and was a contestant in the 2013 season of Dancing with the Stars. But as regards Jamie, there is limited information.

Jamie and Rachel were both studying at the University of Oxford when they became friends and started dating. She was studying Mathematics at Oriel College and he was doing a degree in Classics.

They are thus college sweethearts. They were in a relationship for four and a half years and called it quits. But they soon reconciled.

Jamie was 29 years old when he proposed to Rachel on her 25th birthday on 11 January 2011. The couple was seen shopping for rings during their holiday in Mauritius.

“I thought Jamie was going to propose when we went to a jewellers and he produced an amazing diamond then asked me to design a ring. But he never actually asked the question!”

“When we were in the car on the way home, I asked Jamie if this meant we were engaged – he said he hoped so, so I said he ought to ask properly.”

“When we got home Jamie finally got down on one knee and proposed and that’s when I got really excited. I’m so happy but it hasn’t really sunk in yet. It’ll feel real once the ring is made and it’s on my finger.”

“Rachel will become a household name once her first Countdown episode is broadcast.

‘She’s wonderful at maths. I never understood her work at university – it all looked like random squiggles to me.”

“She will be a TV icon. She’s extraordinary.”

They married on 11 August 2012. But it was an intimate affair with only close friends and relatives on the guest list.

When Rachel joined the show Dancing with the Stars, she got close to her dancing partner Pasha Kovalev and Jamie felt left and alone. They divorced in 2013 just 16 months after marriage.

You may like to read Rachel Riley talks about her relationship with and divorce from her ex-husband Jamie Gilbert!

Jamie was born in 1985. His wealthy father David owns a computer firm called PowerDesk. There are no details available about his mother and siblings if any. He was a brilliant student with an IQ of 173.

Jamie was educated from Charterhouse and later joined Mensa. He completed his degree in Classics from the University of Oxford.

His family had sold their Surrey home to Chelsea and England footballer Ashley Cole and his then-wife Cheryl in 2007 for £3.55million. Jamie had a lavish childhood and a flashy lifestyle. He was a young chess champion.

He used to drive extravagant cars while in Oxford and an old student of Oriel recalled:

“Jamie was known for driving his Lamborghini to classics seminars. That was pretty unusual, even for Oxford. It was a very smart car and he certainly turned heads.”

Read more Who is the girlfriend of Pasha Kovalev? Facts about his girlfriend Rachel Riley!

Jamie is a millionaire and has a sprawling estate in East Sussex. He owns a maroon Lamborghini Murcielago costing £250,000. Jamie works for his father’s high-end computer company. The company started the integration of PCs into luxury furniture such as desks, coffee tables, and kitchen surfaces.

Later it started marketing a remote-control device that helps keep computer boxes and peripherals such as printers from cluttering up your desk. He is a keen hockey player.

Rachel Riley is an English TV presenter best recognized for co-presenting Channel 4’s puzzle game show ‘Countdown’ as well as its comedy spin-off show ‘8 Out of 10 Cats Does Countdown’.

To date, she has also made guest appearances in a number of television programs, such as ‘This Morning ‘, ’12 Again ‘, ‘Pointless Celebrities’ and ‘Who Wants to Be a Millionaire?’, to name a few. More bio…