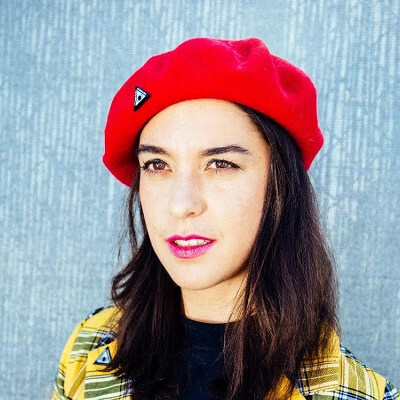 Jamie Loftus is currently single. However, she previously had a relationship while in high school which she has mentioned in one of her Instagram posts and also on a Twitter post. She hasn’t opened up about her current relationship status yet as she is more focused on her career lately.

Who is Jamie Loftus?

Jamie Loftus is an American writer, comedian, podcast co-host, and actor as well. Throughout the years, her writing content has been published in various publications such as The New Yorker, Paste Magazine, Reductress, Playboy, College Humor, and the Boston Globe.

Jamie Loftus was born in 1993 in the East Coast of the United States. Her current age is 27. She spent her childhood in Brockton, Massachusetts and later moved to Los Angeles, California.

There is no information regarding her parents or her siblings as she has not revealed anything about them yet. Similarly, she also hasn’t revealed her education status yet. She does seem to be a well-educated person.

Her ethnicity is English.

She had very absurdist humor which was sometimes bordering on performance art and also documented by websites like Paste. It includes ‘Joining Mensa as a joke’, ‘Pretending to eat a copy of David Foster Wallace’s Infinite Jest’, ‘Pretending to date an American Girl doll’, and ‘Selling Shrek nudes with her body painted green’.

She also has performed several one-woman live shows some of which are ‘I Lost My Virginity on August 15, 2010’, ‘Boss, Whom is Girl’, and many more. The show ‘Boss, Whom is Girl’, was workshopped at the Lyric Hyperion Theatre and was later brought to the United Kingdom with shows in London. It was also recommended by newspapers like ‘The Guardian’, ‘The Sunday Times’, and ‘The Daily Express’ and was run at the Fringe.

In April 2018, a three-part web series called ‘Irrational Fears’ was released on ‘Comedy Central Digital’. It was written and starred in by Loftus. Likewise, she was hired as a writer for the long-running show by Adult Swim called ‘Robot Chicken’. She also wrote a series of humorous articles for Paste Magazine in January 2020.

Loftus has an estimated net worth of around $100K-$1 million. Her salary is not yet determined. However, a writer’s average salary in America is around $65K per annum.

She has black hair with brown eyes. She has a height of around 4 feet 9 inches but her weight is unknown. Moreover, she has not revealed her body measurements for breasts, waist, and hips. Similarly, there is no information about her shoe size, dress size, etc.

There are currently no rumors or controversies regarding Jamie Loftus.

You may also like to know more about the Bio, Age, Career, Net Worth of Whitney Scott Mathers, Alison Sudol, Kevin Burns, and Conan Gray.