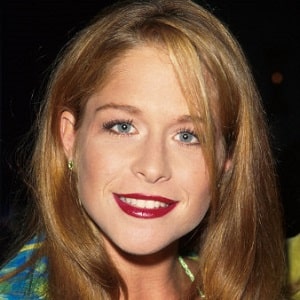 Hiking is the best workout!... You can hike for three hours and not even realize you're working out. And, hiking alone lets me have some time to myself.

I love playing the vamp, and I get sent out for a lot of that stuff, maybe because I do it well.

Jamie Luner is currently single. Previously, she dated John Braz, a professional trainer from 1995 to 1999. The reason behind their separation is still unknown. After that, she has not been linked with anyone. She might be busy in her career or might be searching for the perfect one.

Who is Jamie Luner?

Jamie Luner is an American actress and she is best known for her role as Lexi Sterling on ‘Melrose Place’. Also, she is recognized for her leading roles in many Lifetime movies.

She was born on May 12, 1971, in Palo Alto, California, USA. Her birth name is Jamie Michelle Luner and she is currently 47 years old.

Her father’s name is Stuart Luner(a sales representative) and her mother’s name is Susan(an actress and manager). She has an older brother, David and she was raised in a Jewish family. Her parents divorced when she was 3 years old and her brother was 6 years old.

Jamie holds American citizenship and her ethnicity is Ashkenazi Jewish.

She Studied acting at the Professional Children’s School in New York City and Graduated from Beverly Hills High School in 1989. Also, she graduated from the University of Santa Monica.

Before landing on acting, she worked in L.A. restaurant Drai’s. Even though she faced cameras at the age of three doing TV commercials, she debuted her film career from the role of Diana Moffitt in ‘Moment of Truth: Why My Daughter?’ in 1993. After a year, she appeared in the films like ‘The St. Tammany Miracle’, ‘Trust’, ‘Moment of Truth: Cradle of Conspiracy’ and ‘Confessions of a Sorority Girl’.

She made her breakthrough from the comedy ‘Growing Pains’ and followed by the roles in ‘Growing pains Spinoff’ and ‘Just the Ten of Us’. She increased her fame even more from her performances on ‘Confessions of a Sorority’ in 1994.

Jamie Luner was nominated for Young Artist Award in the category Best Young Actor/Actress Ensemble in a Television Comedy, Drama Series or Special for ‘Just the Ten of Us’ in 1989.

Jamie Luner has an estimated net worth of around $2 million and she has earned that sum of money from her professional career.

Jamie was accused of drugging and filming a sexual encounter with Anthony Oliver in February 2018, who had been a 16 years old boy at the time of alleged conduct in 1998 and the lawsuit alleged that Luner had offered him whiskey and methamphetamines. The lawsuit was dismissed on the statute of limitations on August 6, 2018.