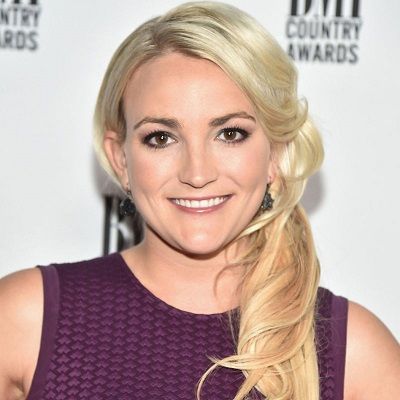 I'll probably do a lot of acting first, then go to singing, but I am going to definitely sing someday. So when I do start singing, buy my album! - upon starting her career in show business

I'm more honest in my lyrics than I am in anything else. It's where I feel the most safe to express myself. I write about growing up, my family, Maddie and getting pregnant. If I've lived it, why wouldn't I talk about it? I guess that's been the coolest thing-realizing that it's OK to just be myself and really tell my story.

Jamie Lynn Spears is happily married to businessman Jamie Watson. Jamie owns a communications service Advanced Media Partners. They had an on and off relationship before announcing their engagement in March 2013.

They married on 14th March 2014 in New Orleans in the tea room at Audubon Tea Room. She wore a gown by Liancarlo which she picked out while shopping for a wedding dress with daughter Maddie.

They filed for a marriage license on March 5. With Jamie, she has a second daughter Ivy Joan born on 11th April 2018.

Jamie was previously dating Casey Aldridge in her mid-teenage. She became pregnant at the age of 16 with Casey’s baby. She gave birth to daughter Maddie Briann on 19th June 2008.

Jamie and Casey engaged in March 2008 but called off their engagement in March 2009. They had purchased a house together in 2008 from where Jamie moved out in February 2010.

Who is Jamie Lynn Spears?

Jamie Lynn Spears is an American actress and singer well-known for her role as Zoey Brooks on the Nickelodeon teen sitcom Zoey 101.

Similarly, she is a singer who released her debut single How Could I Want More along with EP The Journey.

Jamie Lynn Spears was born on 4th April 1991 in McComb, Mississippi, USA. She is the daughter of Jamie Spears and Lynne Spears. Jamie has a sister Britney Spears and a brother Bryan Spears.

She had a tough childhood. Sometimes, her family could not afford food. Her father used to go hunting so that he could feed his family. When her sister Britany launched her career, she was thought to be the next one to do so.

Jamie attended the Parklane Academy in McComb, Mississippi. Spears was a cheerleader and point guard of the basketball team. She was filming for Zoey 101 in Los Angeles so she studied with tutors.

In the year 2002, Jamie played the role of Young Lucy Wagner in Crossroads. Her other movie role is in The Goldilocks and the 3 Bears Show.

Similarly, in 2002-2004, Jamie played the main role in All That. After that, she appeared in Switched!, A Weekend with…, and Britney and Kevin: Chaotic. Jamie signed a development deal with Nickelodeon in August 2004 where she was the protagonist in her own scripted television series.

Likewise, Jamie has played Kyra in Just Jordan, and Miss Guided in Mandy Ferner. Her TV shows appearance includes in I Am Britney Jean, When the Lights Go Out, The Talk, Double Dare, and Sweet Magnolias.

Previously, she had a house in Liberty, Mississippi, US. Her sister Britney has an estimated net worth of $59 million.

She has appeared in many blogs and magazines Seventeen, Teen, Girls’ Life, Mizz and Nickelodeon Magazine. She has endorses products on beauty and wellness products on Instagram.

Jamie sparked controversy when she was the cast of Zoey 101. She found out that she was pregnant. Spears was accused of using her story to glamorize teenage pregnancy.

What exactly happened to Jamie?

After finding out Jamie was pregnant when she was 16 years old, she attracted unnecessary attention. Spears announced that she was pregnant with her then-boyfriend Casey Aldridge.

She gave birth to her daughter on 19th June 2008 at Southwest Mississippi Regional Medical Center in McComb, Mississippi. After that, she stopped visiting high profile places and kept her life undercover. Likewise, she stopped leaving her home.

But she was followed by paparazzi. Jamie filed a complaint against a paparazzi, Edwin Merino for following and stalking her. Merino was released after posting a $1,096 bond. Jamie was too afraid to leave her daughter alone. The thought of someone touching her daughter gave her anxiety.

Jamie and Casey separated as they could not handle their responsibilities. Her career did not go well for a few years. But she made a comeback and is doing great in her career now.

Jamie is brown-eyed blonde. She is 5 feet 4 inches tall and weighs around 57 kg.

38, Britney Spears rocking in bikini with her boyfriend in Miami. Who is Britney’s dating?

Pop-star Britney Spears’s doctor death! Who was he? Britney’s father accused of alleged abuse to her 13-year-old son?