James Oliver is a British chef and restaurateur. He is married and a father of five kids.

Jamie Oliver is a married man. He married Juliette Norton on 24th June 2000.

There is no new of divorce and they are still married to each other. 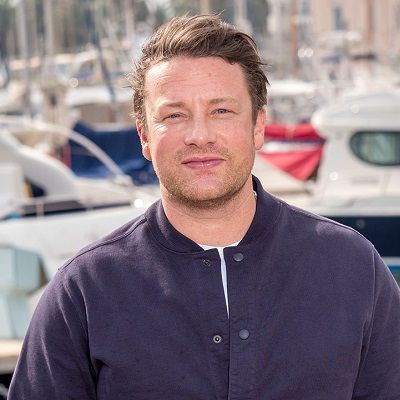 What I've enjoyed most, though, is meeting people who have a real interest in food and sharing ideas with them. Good food is a global thing and I find that there is always something new and amazing to learn - I love it!

I left school with basically nothing, I was a special needs kid. I did feel as though my school had let me down.

Give your kids a bloody knife and fork and let me put some fresh food in front of them they can eat.

Who is Jamie Oliver?

James Oliver is a British chef and restaurateur. Similarly, he is famous for his approachable cuisine which has led him to front numerous television shows and open many restaurants.

Likewise, he was the owner of a restaurant chain, Jamie Oliver Restaurant Group, which opened its first restaurant, Jamie’s Italian, in Oxford in the year 2008.

He was born on 27th May 1975 in Clavering, Essex, England. He is the son of Trevor Oliver(father) and Sally Oliver(mother).

Similarly, he has two siblings Anna-Marie Oliver(sister) and Ian Oliver(brother).

Besides, he belongs to British nationality and his ethnicity is mixed (English and Cornish).

Talking about his education, he attended Newport Free Grammer School.

At the age of sixteen, he left school and with two GCSE qualifications in Art and Geology and went on to attend Westminster Technical College now Westminster Kingsway College.

His first job was a pastry chef at Antonio Carluccio’s Neal Street restaurant, where he first gained experience at preparing Italian cuisine.

Similarly, he developed a relationship with his mentor Gennaro Contaldo. Later, he employed Contaldo to help run his collection of high street restaurants, Jamie’s Italian.

Similarly, he moved to The River Café, Fulham, as a sous-chef. There he was noticed there by the BBC in the year 1997, after making an unscripted appearance in a documentary about the restaurant Christmas at the River Cafe.

In the year 1999, Jamie Oliver’s BBC show The Naked Chef debuted and his cookbook became a bestseller in the United Kingdom. In the same year, he was invited to prepare lunch for the then-Prime Minister Tony Blair at 10 Downing Street.

After three series of Naked Chef programs for the BBC, he moved to Channel 4 in the United Kingdom. Furthermore, his first series was a documentary, Jamie’s Kitchen which followed the setting up of Fifteen restaurants in London.

He has earned his net worth through his television shows, cookbooks, restaurants, and endorsements. Similarly, he might earn a huge amount of money from his career but he has not disclosed his salary and incomes.

Talking about Jamie Oliver’s body measurements, he has a height of 5 feet 10 inches and his weight is 78 kg.

Similarly, he has brown color hair and blue color eyes.