Jamin Davis is currently in a relationship with his girlfriend Jelena Lailoni. The 22-year-old Lailoni is also a student at the University of Kentucky. Though they haven’t revealed when exactly they started dating, it was most likely during their college years. Jelena was frequently seen cheering for her boyfriend in his games for the Kentucky Wildcats.

The two frequently post each other on social media and aren’t hesitant in showing their love for each other. There are also several rumors of the couple getting engaged but this has not been confirmed by them yet. Jamin has also not revealed anything about his past relationship and ex-girlfriends as of now. 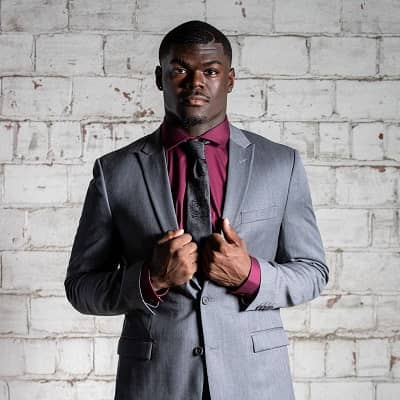 Who is Jamin Davis?

Jamin Davis is a popular American football player. Although he is a rookie, he is well known as a new prospect that plays linebacker for the Washington Redskins in the NFL.

Davis was recently drafted into the NFL in the first round of the 2021 NFL Draft.

Jamin Davis was born on the 12th of December, 1998 in Honolulu, Hawaii, U.S.A. As of now, his age is 22. His nationality is American but he has not revealed his ethnicity as of yet.

Jamin is the son of parents Tanga Davis and James Davis. Both his parents are army veterans and Jamin was actually born on a military base in Honolulu. And roughly 1 year later, their family moved to Georgia, where Jamin was raised for most of his childhood. Jamin also has two siblings, a brother Treyon and a sister Tenisah.

Talking about his education, Jamin is a graduate of Long County High School in Ludowici, Georgia. He played football as a part of their school team and was well known for it. After high school, Davis enrolled at the University of Kentucky and played for their team, the Kentucky Wildcats. He showed great promise even as a collegiate player with 102 tackles, 1.5 sacks, a forced fumble, and a fumble recovery, along with three interceptions, one of which he returned 85 yards for a touchdown in his 3rd year of college. Davis is set to graduate from the University sometime in May of 2021 with a major in community and leadership development.

Davis showed a lot of promise in his collegiate career as a footballer which eventually led to his recent draft in the NFL. And although he was just drafted, Jamin has a lot of hype surrounding him. Many expect great performances from the young athlete and looking at his track record so far, he will most probably have a great career in the NFL.

Davis was just selected by the Washington Football Team (Washington Redskins) in the first round of the 2021 NFL Draft. Jamin was the 19th overall pick in the draft and recently signed his four-year rookie contract on the 13th of May. He will be playing as a linebacker for the team.

Jamin has not revealed his exact net worth as of now. But several estimates suggest his net worth to be around 5 million U.S. dollars thanks to his recent signing into the NFL. Thanks to his recent contract with the Washington Redskins, Jamin will have a chance to cash in a $7-$8 million signing bonus and will make roughly $3 million per season from here on.

Davis stands at a height of 6 feet 3 inches tall and his weight is roughly 106 kilograms. He is blessed with good looks and has built a muscular and athletic physique fit for football. His eyes are brown and his hair is black in color.

Also, get to know more about the lives of celebrities such as  Trevor Gretzky and Emmitt Smith.