Talking about her relationship details, Jane Goodall was married to Derek Bryceson who was a member of Tanzania’s parliament and director of that country’s national peaks. Sadly, he passed away in October 1980 due to cancer. 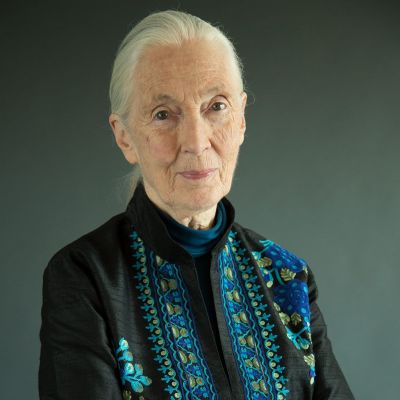 Who is Jane Goodall?

Moreover, she is widely famous for her 60-year study of social and family interactions of wild chimpanzees as she went to Gombe Stream National Park in Tanzania in 1960.

Jane Goodall was born on 3 April 1934. At present, her age is 87 years old. Likewise, her birthplace is London, England, the UK.

Jane is the daughter of her father, Mortimer Herbert Morris-Goodall whereas her mother is Margaret Myfanwy Joseph. Moreover, she has a sister named Judy Goodall.

Talking about her nationality, Goodall holds a British identity whereas her ethnicity is English and Irish.

Regarding education, the primatologist studied at Uplands School and received her school certificate in 1950 and a higher certificate in 1952. Later, she went to find employment as a secretary at Oxford University. Goodall then finished her education at Darwin College.

From an early age, Jane was highly drawn to animals and she was drawn to the farm with the help of her friend in the Kenya highlands in 1957. There, she worked as a secretary and met Louis Leakey who is a Kenyan archaeologist and paleontologist. In 1958, Goodall was sent to London to study primate behavior with Osman Hill and primate anatomy with John Napier.

Moreover, Goodall is famous for her study of chimpanzee social and family life. The primatologist started studying the Kasakela chimpanzee community in Gombe Stream National Park, Tanzania, in 1960. She then observed behaviors like hugs, kisses, pats on the back, and even tickling which is similar to human action.

In 1977, Jane formed the Jane Goodall Institute which promotes the Gombe research. Currently, she is a global leader in the effort to preserve chimpanzees and their habitats. JGI is famous for community-centered conservation and development programs in Africa with nineteen offices around the world.

Similarly, the primatologist established the Tchimpounga Chimpanzee Rehabilitation Center in the Republic of Congo in 1992 to care for chimpanzees orphaned due to the bush-meat trade. She also formed the Lake Tanganyika Catchment Reforestation and Education pilot project to protect chimpanzees’ habitat from deforestation.

A famed primatologist, Goodall has earned a handsome amount of money from her profession. She lives a quality lifestyle along with her family.

It is reported that Jane Goodall has an estimated net worth of $10 million.

Jane used unconventional practices in her study, naming individuals instead of numbering them. She used numbering to prevent emotional attachment and loss of objectivity.

However, many standard methods are targeted to avoid interference by observers, and in particular, some believe that the use of feeding stations to attract Gombe chimpanzees has altered normal foraging and feeding patterns and social relationships.

Additionally, Goodall’s new book, Seeds of Hope was not released as announced by Hachette Book Group on 22 March 2013 due to the discovery of plagiarised portions. Also, The Washington Post found some content was copied from Wikipedia. As a result, Jane apologized for such activity.

87 years old primatologist, Jane has beautiful looks and an admirable personality. She stands at a height of 5 feet 5inches. Also, she has a balanced body weight of 50kg.

Furthermore, Goodall has hazel eyes whereas her hair is white.

Regarding her social media presence, Jane Goodall is an active personality on social media. Jane has more than 1 million followers on her official Instagram account @janegoodalinst.

She is also active on Twitter with around 1.4 million followers.

Moreover, Goodall is also available on Facebook with nearly 2.4 million fans and supporters.