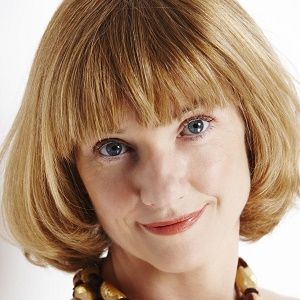 If you're still acting when you're old, there's something wrong with you. [on her 2-year break]: It made me realize that housewives are interesting to be with too.

What is the relationship of Jane Horrocks?

Jane Horrocks is not a married woman but is in a long-term relationship. She is with her boyfriend Nick Vivian, a playwright. They are together since 1996.

The couple has been blessed with two children named Dylan and Molly.

Currently, she lives along with her partner and children in Twickenham.

Who is Jane Horrocks?

She was born on 18 January 1964 in Rawtenstall, Lancashire, England, UK. She is the daughter of Barbara and John Horrocks. Her mother is a hospital worker while her father is a sales representative.

The detail of her ancestry is currently unavailable.

Besides this, she has attended the Royal Academy of Dramatic Art with her classmates Imogen Stubbs and Ralph Fiennes.

She started her career with the Royal Shakespeare Company and drew critical notice for her performance in the film Life Is Sweet, followed by her award-winning performance in the West End play The Rise and Fall of Little Voice in which she sang all the songs.

Her last West End appearance was in Sweet Panic, the 2003 Stephen Poliakoff drama, and then She starred in Richard Jones’s critically acclaimed production of The Good Soul of Szechuan at the Young Vic in 2008.

In October 2009, she was reunited with Jones in a new musical production of Annie Get Your Gun, which opened at the Young Vic, and in the same year, Horrocks took the lead in the BBC TV production.

Horrocks played Ella Khan in the London revival of East is East at Trafalgar Studios as part of Jamie Lloyd’s Trafalgar Transformed season in October 2014, Besides that she supplied the voice of the Tubby Phone in the reboot of the popular British children’s television series Teletubbies in 2015.

She was awarded for her performance in “The Rise and Fall of Little Voice”, a play directed by Jim Cartwright who had written the play in awe of Jane’s singing impressions of Shirley Bassey, Judy Garland, and Ethel Merman.

Jane Horrocks: Salary and Net Worth

She earns numerous amounts of money but has not disclosed it to the media. As of 2020, her estimated net worth is $9 million.

She knows to maintain her professional life better than others. Also, she has been keeping her personal details far from the media.

Jane Horrocks has an average body type with dark brown hair and dark brown eyes. Besides, she is 5′ feet 2″ inches tall with a body mass of 85 kg. Her shoe size and dress size are unknown.