Jane Krakowski is an American actress, singer. Currently Jane is single. However, she has dated quite a few men. 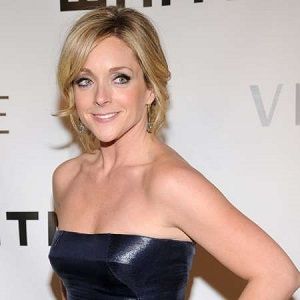 I've never felt anything so exciting as when this unanimous gasp came from the audience. That's why I love doing live theater more than anything: You get an immediate reaction, whether it's good or bad

I was one of those people who watched and videotaped the Tonys every year and kept a highlight reel every year. I saw every Broadway show as a kid. Basically, I would sit there in the audience and go, "I wish I could do that one day." The fact that I even get in Broadway shows is, to me, still amazing, but then to win a Tony was just incredible.

Jane Krakowski is a divorced woman.

She was in a relationship with an English actor and singer, Julian Ovenden in the past. She dated 20 years her senior English documentarian, Marc Singer in 2007.

Then, she was in a relationship with Adam Guettel in 2008.

She also dated screenwriter, playwright, and producer Aaron Sorkin, they were seen at Beverly Hills High School where the pair were present to see Aaron’s daughter play basketball in January 2009.

Moreover, she started dating British designer of men’s clothing, Robert Godley and got engaged to him during Christmas 2009 when he proposed Jane. But the marriage didn’t last long so they split in 2013.  The couple has a  first child, son Bennett Robert Godley in NYC.

Who is Jane Krakowski?

Jane Krakowski is an American singer, and actress. She has been nominated four times for the Primetime Emmy Award for Outstanding Supporting Actress in a Comedy Series.

Jane Krakowski was born in Parsippany-Troy Hills, New Jersey, the United States on October 11, 1968, and she is 50 years old. Her father’s name is Ed Krajkowski (chemical engineer) and her mother’s name is Barbara Krajkowski (theater instructor).

Her family has a background in the entertainment sector, she was interested in theater and dancing from a very young age. She has an older brother but his name is unknown.

She completed her schooling in the Professional Children’s School in New York City and later graduated from Rutgers University.

Jane is a multi-faceted personality who has excelled in multiple art forms. She also got her first role in acting while she was still in her teens. During 1983, she also played an oversexed cousin in ‘National Lampoon’s Vacation’. Later, she also got opportunities on daytime television. She also acted in the TV show ‘Search for Tomorrow’ during 1984-1986.

By the later 1980s and early 1990s, she also started focusing on theater. She found some success on the New York Stage. Likely, her first Broadway role was in Andrew Lloyd Webber’s ‘Starlight Express’. She also played several Broadway roles like the one in ‘Once Upon a Mattress’ along with Sarah Jessica Parker in the year 1996.

Between the years 1997 to 2002, she also played the role of an office assistant in the TV Show ‘Ally McBeal’. She also acted in many movies like ‘Fatal Attraction’, ‘Marci X’, ‘Dance With Me’, and ‘Mom at Sixteen’. Besides that, she also tried her luck in TV movies like NBC’s ‘A Christmas Carol: The Musical’ in the year 2004.

Even though she had made her name in movies and television, she never lost her interest in singing. She also released her debut solo album in the year 2010. From then she also continued to release her solo albums like ‘The Laziest Gal in Town’ in the year 2010 and Broadway revival cast recording ‘She Loves Me’ in the year 2016.
Till the year 2016, she also continued to focus on TV, Theatre, and Films with several hits to her credit like Xanadu (theatre), Pixels (movie), and Unbreakable Kimmy Schmidt (TV). Rather than acting in complete roles, Krakowski also lent her voice to many characters on both TV and Movies.

She was nominated for Golden Globe Award for Best Performance by an Actress in a Supporting Role in a Series, Miniseries or Motion Picture Made for Television for Ally McBeal (1997).

Likewise, she was also nominated for Daytime Emmy Award for Outstanding Ingenue in a Drama Series for Search for Tomorrow (1951).

There is no information regarding her income, salary. Whereas, her net worth is estimated to be around $14 million according to the sources.

Jane hasn’t been linked to any known controversy, rumors, and legal issues. She is far from rumors and controversies.

Also, read the affair, salary, the net worth, controversy, and the bio of Julie Condra, Rochelle Aytes, Amber Stevens