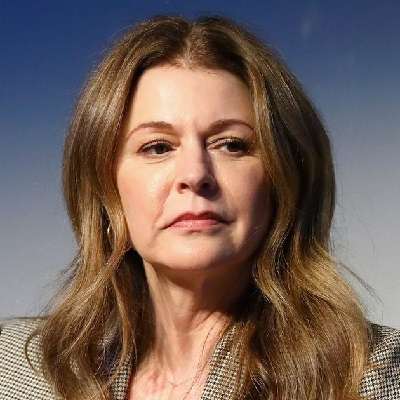 Jane Leeves is happily married to Marshall Coben. Her husband, Marshall is a CBS Paramount TV executive. The couple got married on 21st December 1996.

Together, the couple is blessed with two children; Isabella Kathryn Coben and Finn William Leeves Coben.

Also, she happens to be the godmother of the Frasier co-star, Peri Gilpin‘s children; Stella Mae and Ava Pearl.

Who is Jane Leeves?

British Jane Leeves is Emmy and Golden Glode nominated actress, comedian, and entrepreneur. Jane Leeves is renowned as Daphne Moon of Fraiser and Ladybug of James and The Giant Peach.

Last, in 2020, she made her appearance in the TV series, The Resident as Kit Voss.

Next, she will be making her appearance in the TV movie, Untitled Hannah Simone as Caroline.

Jane Leeves was born on 18th April 2961 in East Grinstead, England. She is of British-Irish ethnicity. Her birth name is Jane Elizabeth Leeves.

She is the daughter of Ruth Leeves (mother) and Collin Leeves (father). She has a sister named Kathryn Leeves.

Moving towards her academics, she attended Bush Davies School of Theatre Arts in the United Kingdom.

She made her acting debut with the British comedy series, The Benny Hill Show as one of the Hill’s Angles. After that, she made his appearance in the musical sketch comedy, Monty Python’s The Meaning of Life as a dancer.

Moving forward, she moved to the United States and started making appearances in various TV series in some character roles. Such TV series include David Lee Roth, Video Spotlight, and Murder, She Wrote. In 1986, she came to the limelight when she made her appearance in the TV series, Throb as Prudence Anne ‘Blue’ Bartlett.

In 1993, she featured NBC’s sitcom, Frasier. She portrayed the character of the physical therapist and caregiver, Daphne Moon in the series. Her character became one of the biggest milestones in his acting career.

For the roles, she got nominated for Screen Actors Guild Awards nine times. Also, she received nominations in Gloden Globes and Primetime Emmy Awards.

In 2018, she featured the TV series, The Resident. In the Fox Medical Drama, she portrayed the character of an orthopedic surgeon, Kitt Voss. As of 2020, she featured in the 2nd season of the drama.

Apart from being an actress, she is also a businesswoman. She owns the all-natural skincare and baby product, Tellurian Foundation.

Jane Leeves has brown eyes with brunette hair. She stands at a height of 5 feet 10 inches and weighs around 59 kg. Her body measurements are 33-25-35 inches.

To date, she has not been part of any kind of controversy and scandals that created headlines buzz in the media. Besides that, she has managed to maintain distance from any type of rumors.

On Instagram, she is following the personalities like Rachel Elizabeth Cargle, Shaunette Renée Wilson, and Bruce Greenwood.