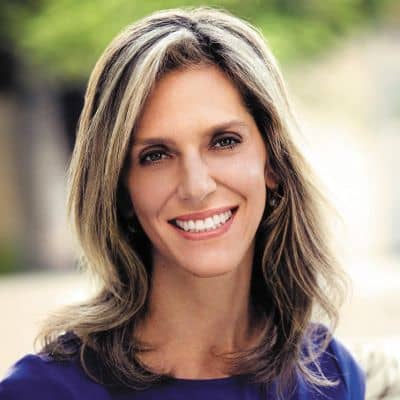 Talking about her relationship details, Jane Rinzler is presently single and she is not dating anyone at the moment. She seems to be focused on her career and professional life.

Earlier, Jane was married to her longtime partner, Marcus Buckingham. The couple the knot in 1996 and was blessed with two children, Jack and Lilia. However, they separated in 2017 without any unclosed reason.

Who is Jane Rinzler?

Jane Buckingham is a well-recognized American author and businesswoman. Rinzler is famed for writing “The Modern Girl’s Guide to Life” book series which spawned the television series of the same name.

Moreover, she was found guilty in the 2019 college admissions bribery scandal.

Jane Rinzler was born in the year 1968. At present, she is 53 years young star. Likewise, her birthplace is New York City, New York, the USA.

Not much is known about his father and mother’s details, Jane has been secretive towards her family details. Moreover, she has not mentioned her sibling’s information in the public till now.

Talking about her nationality, Rinzler holds an American identity whereas her ethnicity is Caucasian.

Regarding education, the businesswoman studied her high school at Horace Mann High School. Later, she graduated from Duke University where she majored in the English Language and Literature.

Jane began writing at an early age and she wrote the book, Teens Speak Out at the age of 16. Later, she initiated her own youth-focused trend-forecasting firm, Youth Intelligence, in 1996. While managing the Youth Intelligence, Rinzler published The Cassandra Report, a top forecasting study used by large companies.

Her book, The Modern Girls Guide book series was transformed into a television series that aired for 36 episodes for the Style Network in 2003. In 2009, Jane started her own trend forecasting, consulting, research, and multi-media company, Trendera.

Presently, the star is working as a contributing editor at Glamour and The Huffington Post. Also, she appears frequently on Good Morning American and The View.

A well-known American author and businesswoman, Rinzler has earned a handsome amount of money from her profession. She lives a lavish lifestyle.

It is reported that Jane Rinzler has an estimated net worth of $500k-$1million.

However, the author has not disclosed her exact salary, earnings, and assets details till now.

Jane was caught on 12 March 2019 for her involvement in a college admissions bribery scandal. She donated $50,000 to the college counseling firm Key Worldwide Foundation without her son’s knowledge to manage for a proctor to take the ACT on her son’s behalf.

Later, in April, Buckingham accepted to plead guilty. She got sentenced by the U.S. District Court Judge, Indira Talwani for 21 days and was fined $40,000. However, the U.S. Attorney’s Office looked after a sentence of six months in prison mentioning, Rinzler was more deeply involved.

53 years young star, Jane has beautiful looks and an admirable personality. She stands at a height of 5feet 6inches. Also, she has a balanced body weight of 53 kg.

Furthermore, Rinzler has hazel eyes whereas her hair is blonde.

Nevertheless, the author has never mentioned other physical details in the public yet.

Regarding her social media presence, Jane Rinzler is an active personality on social media. Jane has more than 82.5k followers on her official Instagram account @janebuckingham.

She is also active on Twitter with around 27.4k followers.

Moreover, Rinzler is also available on Facebook at the moment.