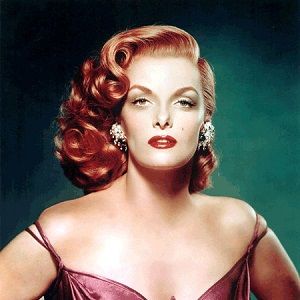 They held up The Outlaw (1943) for five years. And Howard Hughes had me doing publicity for it every day, five days a week for five years

Sometimes the photographers would pose me in a low-necked nightgown and tell me to bend down and pick up the pails. They were not shooting the pails

The music these kids play nowadays, it's nothing but screaming and pounding drums! You can't hear the words, and that's just as well, because the words stink!

Then, she married Roger Barrett in 1968. However, the marriage lasted only a few months as Barrett passed away in November 1968.

In addition, she married John Calvin Peoples in 1974, the marriage lasted until his death.

Who was Jane Russell?

Jane was an American film actress. Additionally, she did her first film role in 1943, in the movie The Outlaw. During  1947, she delved into music before returning to films.

After starring in several films in the 1950s, including Gentlemen Prefer Blondes in 1953, she again returned to music while completing several other films in the 1960s. In addition, she also starred in more than 20 films throughout her career.

She has four siblings namely, James H. Russell, Kenneth Russell, Wally Russell, and Thomas Russell. She belongs to American nationality and ethnicity is unknown. Her birth sign was Cancer. Talking about her education, she attended Van Nuys High School.

On talking about her profession, her big break came in the most bizarre of situations when she was picked by director Howard Hughes. Subsequently, she also signed a seven-year contract with Hughes.

Besides that, she also came up with a 78 rpm album for Columbia Records, titled, ‘Let’s Put Out the Lights’. During 1950, she also recorded a duet, ‘Kisses and Tears’, with Frank Sinatra and The Modernaires for the film, ‘Double Dynamite’.

During  1959, she came up with her self-titled solo LP on MGM Records. During 1964, she returned to the big screen with the film, ‘Fate is the Hunter’. In the movie, she also performed as herself for the USO in a flashback scene.

Similarly, she also followed this up by four more movies titled, ‘Johnny Reno’, ‘Waco’, ‘Born Losers’ and ‘Darker than Amber’. During 1971, she also made her Broadway debut with the musical drama, ‘Company’. During 1985, she also turned a writer and penned her autobiography, ‘Jane Russell: My Path and My Detours.’

She won the Berlin International Film Festival Award, she won Golden Apple Awards for Most Cooperative Actress. Likewise, she won the Golden Boot Awards. Then she won the Marco Island Film Festival. Additionally, she won Walk of Fame Award for Motion Picture. She earns a decent amount of salary.

Her net worth was around $ 40 million.

On talking about her body measurements, Jane has a height of 5 feet 7 inches. Additionally, she weighs is 59Kg. In addition, she has a measurement of 38-24-36 inches. Jane’s hair color is black and her eye color is brown.

She died on February 28, 2011, at the age of 89 in Santa Maria, California, United States. The cause of her death was Shortness of breath.

Also, read the affair, salary, the net worth, controversy, and the bio of  Erica Rose, Traci Bingham, Zulay Henao