Janel Moloney is an American film and theatre actress. She is married and a mother of two.

She is married to Marcelo Zarvos. Marcelo is a Brazilian pianist and composer. They married on January 5, 2010. 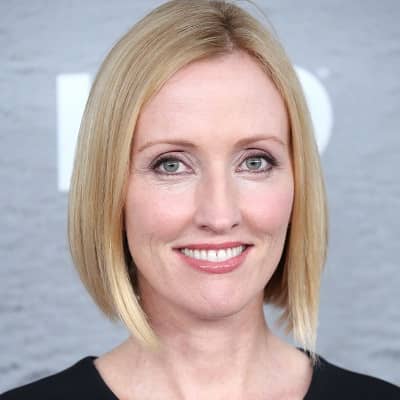 Who is Janel Moloney?

Janel Moloney is an American film and theatre actress. She is popular for portraying Donna Moss on the television series The West Wing. Following she has worked for various theatres, movies, and series.

Janel was born on October 3, 1969, in Woodland Hills, Los Angeles, California, United States. Her full name is Janel Wallace Moloney. She has Irish and Scottish descent.

Her mother’s name is Judith A. (Wallace) and likely, her father’s name is John R. Moloney. Janel’s uncle Bill Moloney, is married to actress and singer Christine Ebersole.

In her initial days, Janel worked in TV and has performed various roles. She has guest roles on ER, Sports Night, The Adventures of Brisco County, Jr., and Murder, She Wrote.

Early in 1999, Janel played Donna Miss on The West Wing which was her career breakthrough. The actress is popular for her performance in the series.

Afterward, she appeared in the television film Bang Bang You’re Dead, as Amber Frey in  Amber Frey: Witness for the Prosecution in 2005, and followingly portrayed Dana Chase in six episodes of the 2nd season of Brotherhood (2007). The next year, she appeared in one episode (“It’s a Wonderful Lie”) of House M.D.

The actress debuted in theatre playing as Theresa in the Playwrights Horizons production 100 Saints You Should Know in 2007. Likely, she appeared in the Off-Broadway play Love, Loss, and What I Wore in September through October 2, 2011.

Janel is one o the highest-paid TV actors and has amassed a net worth of around $10 million as of 2022.

The average salary of a TV actress ranges between $47,601 and $70,501. And so Janel also she must have good earning from her acting career.

The actress has maintained a low profile when it comes to her personal life. And so, she hasn’t been in any kind of rumors and controversial news.

Talking about her body measurement, it is 29-22-31 in. Similarly, she has blonde colored hair with beautiful blue eyes.