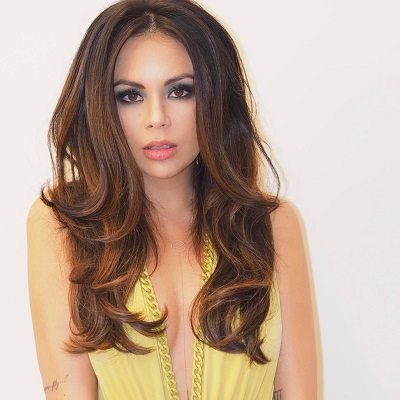 I like to stay hydrated with water throughout the day and snack on apples, but my guilty pleasure would definitely be a caramel macchiato from Starbucks!

For me, my favorite trends of summer are lots of color, wedges, rompers and bright lipstick.

I'm lucky to have parents who used to be bodybuilders! They help me keep fit by going to the gym and training with me. I'm also addicted to Cardio Barre classes and hiking.

Janel Parrish is married to her long-term boyfriend Chris Long. Her husband, Chris Long is a chemical engineer by profession.

Finally, the couple tied the knot on the 8th of September 2018 in her hometown, Oahu, Hawaii.

Who is Janel Parrish?

American Janel Parrish is a Teen Awards winning Actress and singer. Parrish is renowned as Mona Vanderwaal of The Pretty Little Liar.

She is also the second of the American Dance Show, Dancing with the Stars.

Last, she appeared as Morgat in To All the Boys: P.S. I Still Love You.

Next, in 2020, she will be appearing in Until We Meet Again as Lisa Wagner.

Janel Parrish was born Janel Meilani Parrish on the 30th of October 1988 in Honolulu, Hawaii, the U.S. Her father, Mark Phillip Parrish is of French ancestry and mother, Joanne is of Han Chinese ancestry. They are former bodybuilder by profession.

Her elder sister, Melissa Nohelani is a US army.

As she was a child, she fell in love with the idea of performing. The first gig of performing appears when she saw the making of the music video, The Phantom of the Opera at the Neal S. Blaisdell Center.

Soon after that, she started playing piano and taking classes for Jazz, acting and dancing. Now, she started making her appearance in many talent contests. Her performance in those contests made her popular in her hometown.

She joined Moanalua Elementary School. Following that, she attended Moanalua High School. During High School, she pursued acting as her career. Hence, she was homeschooled to maintain her working schedule.

Professionally, she started her career as portraying the character of the Young Cosette for the national touring company, Les Misérables. Following that, she joined Imperial Theatre as an artist. After that, she landed several roles in other theater productions too.

In 1999, she debuted on TV with the series, Too Rich: The Secret Life of Doris Duke. However, her role in the series was uncredited. The same year, she appeared as Natalie in The Wonderful World of Disney. Now, she became is a renowned face in the world of TV series.

In 2010, she was cast in the TV series, Pretty Little Liars. In the murder-mystery, she appeared in a negative character named Mona Vanderwaal. The series became a turning point in her acting career. For the character, she won many awards. In 2019, she also made her appearance in the spin-off show of Pretty Little Liars.

In 2007, she released her first single, Rainy Day under the production label, Geffen Records. The song was self-written. Later, it also became a track in the movie, Bartz Soundtracks.

Following that, she also met appearance in the music video Rock Star. Last, in 2015, she launched her songs Heart Made of Stones and Senseless.

Spending more than a decade in the entertainment, she made a hasty net worth of $700k. Her earnings as an actress is in the range of $19k – $208k.

Apart from that, her earnings as a singer is $21k to $207k. She makes through her Instagram posts which are mostly sponsored. Also, she earns through her partnered brands that include Beauty Rest Black mattress and Room & Board Modern Furniture.

Till now, she has not been any part of controversy that had made a buzz in the media.