Known for her work in Glee, The X Factor (US), and Fired Up. Also, she is active on Youtube with around 447k subscribers. 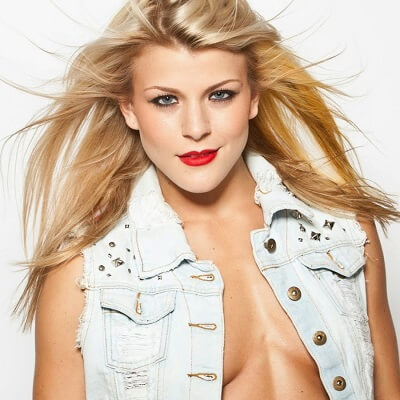 Both of them are choreographers and are dance partners for each other. The duo was in a relationship for several years before Adams proposed to her in May 2017.

More than a year later, the pair got married in September 2018. The wedding was in Huntington Beach, California in the presence of close friends and family members. The newly married couple performed a stunning 8-minute dance as the ‘first dance’ on the occasion.

Since then, they have been living happily and continuing to follow their passion and dreams.

Who is Janelle Ginestra?

Janelle Ginestra is an American professional dancer, choreographer, and actress. She is also a Creative Director.

She is well-known for her work in Glee, The X Factor (US), and Fired Up. Also, she is active on Youtube with around 399k subscribers.

Janelle Ginestra was born on May 14, 1989, in Santa Clara, California, the United States of America. As of 2020, her age is 30. She has not revealed her parents’ identities. Also, there is no information regarding her siblings and other family members. She began dancing at the age of 2.

During her childhood days, she danced for local shows and competed in dance competitions. At the age of 7, she moved to Los Angeles to pursue acting and moved to Modesto when she was 12 for her studies.

Her ancestry is Italian.

There is no information regarding her educational background. She is a high-school graduate. However, she has not revealed her school or college.

Ginestra trained at the Millennium Dance Complex and EDGE Performing Arts Center. She started off her career with roles in Fired Up! and Bring It On: Fight to the Finish. However, she wanted to become a dancer more than anything.

She also appeared in Alvin & The Chipmunks, Honey 2, Glee, The X Factor, and Bunheads which gave her the chance to dance in front of the camera.

Also, she appeared in Nicky Minaj’s ‘Anaconda‘ music video. Following that, she toured with P!nk and Jennifer Lopez, and got the opportunity to dance with Beyoncé.

She also started a YouTube channel and posted her first video in March 2010 (a solo to ‘My Chick Bad’, by Ludacris). Her YouTube channel now has around 399k subscribers. She also met Adams in 2009.

Janelle Ginestra has an estimated net worth of around $100k-$1 million. However, there is no information about her salary. An average American dancer makes around $47k a year. However, with her YouTube channel and her business, she is expected to earn much more than that.

There are no rumors about her. Similarly, she has not been a part of controversies. She is very much focused on her career and her goals.

Janelle has brown hair and blue eyes. She has a height of 5 feet 7 inches and her weight is unknown. Similarly, she has not revealed her body measurements, too. There is no information about her shoe size, dress size, bra size, etc. She has an attractive body that she has maintained by dancing and exercises.

She also has a Youtube channel with the username MissJanelleG.

You may also like to read the Bio, Career, Body Measurements, Social Media, Relationships, and more of Anna McNulty, Marius Iepure, Tallie Brinson, and more.