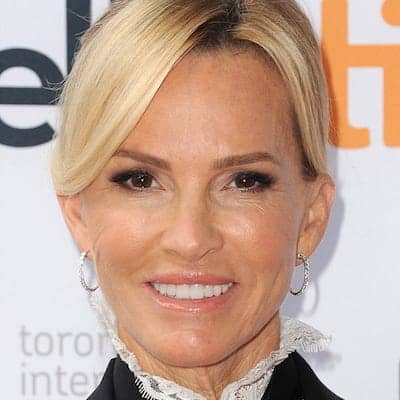 "I kind of stopped the impact with my face." - on being knocked unconscious by a pane of plexiglass during a 22 October 1997 New York Rangers-Chicago Blackhawks game.

Janet Jones is currently a married woman. She exchanged vows with Wayne Gretzky on 16 July 1988 while being pregnant with her first child. Her husband is a former Ice hockey player plus head coach.

Their wedding was a lavish ceremony and was shown live in Canada. It was held at St. Joseph’s Basilica and was attended by stars Gordie Howe, Paul Coffey, and Alan Thicke.

As per the sources, the wedding gown of the bride was $40k and the whole ceremony was performed at an expense of $1 million.

Then they welcomed their sons, Ty Robert and Trevor Douglas in July 1990 and Sep 1992 respectively. The couple’s fourth and fifth kids are Tristan Wayne (born Aug 2000), and Emma Marie (born March 2003).

Janet before Wayne was with a tennis player, Vitas Gerulaitis. They were engaged in 1985 but called it off in 1987.

She went to his funeral when he passed away in 1994 due to death by carbon monoxide poisoning.

Who is Janet Jones?

Moreover, she is also the wife of an Ice Hockey player, Wayne Gretzky.

She was born as Janet Marie Jones on 10 Jan 1961 in Bridgeton, Missouri, USA. The name of her mother was Jean but her father’s name was Robert Jones.

Janet’s ancestry is Caucasian and has six brothers and sisters. Talking about her academics, she is a pass out of Pattonville High School.

But her popularity rose after she portrayed the character of Kate in Police Academy 5: Assignment: Miami Beach (1988). Her role was much appreciated by the viewers. The other main casts of this comedy-crime were Bubba Smith, David Graf, Michael Winslow, etc.

Before this, her other acting credits are,

At present, she collected an estimated net worth of around $10 million. However, her salary and other earnings are unknown.

Her former ice hockey player spouse has assets of around $250 million. Some of the top actress’s financial worth is,

This actress is keeping herself away from rumors and is also not surrounded by any desperate scandals. But in Feb 2006, she along with some NFL players were accused of gambling.

They were caught for putting money on a sports ring which was said to be financed by Rick Tocchet. But the lawyer of Jones said that there is no proof of betting neither from her side nor from her husband’s side.

She and Rick filed a case against the state for defamation in May. But as per the verdict of May 2007, Rick was found guilty of gambling and he was sentenced to two years of probation.

Regarding Janet Jones’s body features, her height is 5 ft 9 inches and her body weight is 56 kg.

Moreover, her eyes are brown, her natural hair color is brown, and has a fair skin complexion. her body stats are 34-25-35 inches and she wears a shoe size of 9 US.