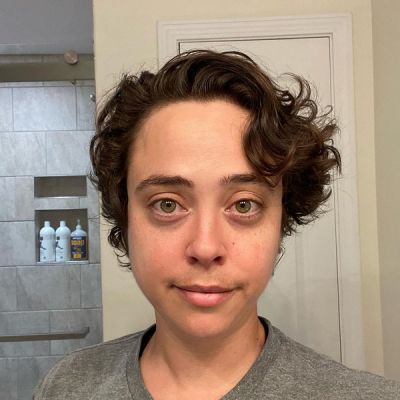 Janine Brito is already taken. Her sexual orientation is lesbian. She is married to fellow comedy writer, Paula Pell.

In August 2018, the duo got an engagement and tied the wedding knot on November 13, 2020, in an intimated ceremony due to the pandemic.

Who is Janine Brito?

Janine Brito is an American actress, writer, and comedienne.

She is best known as the writer and on-air correspondent for the television program, Totally Biased with W. Kamau Bell.

Janine celebrates her birthday on the 10th of August, however, she hasn’t disclosed her birth year in the media. She was born in Florida, United States.

The actress hasn’t shared anything regarding his parents. Talking about his education, she attended her junior high school in Scotland and Hong Kong and high school in Kentucky.

After high school, she moved to St. Louis where she enrolled at the Washington University in St. Louis.

Briot is of American nationality whereas he belongs to mixed (Cuban and Icelandic) descent.

After graduation, she remained in St. Louis and started pursuing her comedy career. In 2008, she moved to Bay Area where she met comic W. Kamau Bell who later became a mentor to Brito. Shen then joined Bell and fellow comic Nato Green in Laughter Against the Machine in 2010. In 2012, she worked as the writer in Bell’s FX series, Totally Biased with W. Kamau Bell.

Similarly, she is a writer for the critically-acclaimed Netflix series, One Day At A Time where she also made a cameo role as Mia on Season 3. Brito portrayed the role of Kira in the Netflix film, Wine Country. She is also the writer of the film. She performed in several festivals including SF Sketchfest, the Bridgetown Comedy Festival, the Glasgow International Comedy Festival, SXSW, Hell Yes Fest, and the Moontower Comedy Festival.

In May 2019, she also performed on Late Night with Seth Meyers. Further, she is a writer on the animated comedy series Bless the Harts starring, Kristen Wiig and Maya Rudolph.

In 2009, Brito won the SF Women’s Comedy Competition and Silver Nail Award from local SF casting network Rooftop Comedy. She was named “one of SF’s more daring voices” and as one of “the 7 funniest people in town” by 7*7 magazines.

Similarly, she was named the 2011 “Best Comedian with a Message” by the East Bay Express.

Janine has managed to maintain a clean profile. She hasn’t been part of any sorts of rumors and controversy that create a huge buzz in the media.

Janine might have earned an impressive amount of net worth throughout her profession as an actress, writer, and comedienne. However, her precise net worth, salary, and other earning are still under review.

Talking about Janine’s physical appearance, she has a fair complexion. Likewise, she has a brown pair of eyes and as well shorts brown hair color.

Her height, weight, and other body measurements aren’t available in the media.

Janine has a verified Twitter account where she has more than 17.4k followers. She is active on Instagram under the username @j9burrito with over 5k followers.

She has also a Facebook account with 1.9k followers. Janine has shared her email id [email protected] for any business inquiries.