January Jones is an actress and model who was seen as Betty Draper in Mad Men. 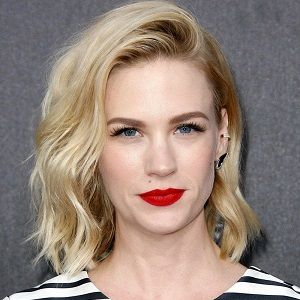 My dad liked how January went with Jones. My sisters' names are Jina and Jacey Jones

I feel as though my career really hit its high point when I was cast as a supporting actress in 'American Wedding'. I thought the script had a lot of depth and intelligence, and it really just jumped off the page

A lot of the stuff that I do with Betty is in the eyes. A lot of the feelings that I evoke with her are unspoken, so that's been fun to play with.

What is the relationship of January Jones?

January Jones is an unmarried woman. Although, she has dated several hunks in her life.

In 2003, she began dating Josh Groban. The couple stayed in a relationship for three years and later broke up in 2006.

After a couple of years, she started going out with producer and actor, Tommy Alastra. Same as the previous relationship, they also split up just after a year in 2009.

Furthermore, she has also dated Jeremy Piven, Jason Sudeikis, and Noah Miller. Later in 2013, she was also linked up with actor Liam Hemsworth and soon separated.

In the year 2015, there was also a rumor that the American actress also dated Will Forte. Apart from that, there were several rumors that January has also dated Adrien Brody.

Currently, January is rumored to be dating The Bachelor’s constestant, Nick Viall.

The news sparked in the year 2018 and the two were later seen celebrating January’s 40th birthday together in Los Angeles along with some of the actress’s former Mad Men co-stars.

However, the two haven’t yet spoken about their relationship.

Who is January Jones?

January Jones is an American actress and model. She rose to prominence after appearing as Betty Draper in Mad Men.

She has also been nominated for two Golden Globe Awards for Best Actress – Television Series Drama and a Primetime Emmy Award for Outstanding Lead Actress in a Drama Series.

Furthermore, her other notable films include American Wedding, We Are Marshall, Seeking Justice, X-Men: First Class, and a few more.

January was born on January 5, 1978, in Sioux Falls, South Dakota, United States. She is the daughter of Marvin Jones and Karen Jones.

Moreover, she has two siblings, Jina Jones, and Jacey Jones. Talking about her nationality, she is American and her ethnicity is mixed Czech, Danish, English, Welsh, and German.

Concerning her education, she completed her graduation from Roosevelt High School.

January Jones began her acting career as Janice Taylor in the 1999 film It’s the Rage. In the same year, she also appeared in the TV series Get Real.

Soon after that, she featured in a couple of movies such as The Glass House, Taboo, Full Frontal, Anger Management, and a few more.

Furthermore, the American actress has starred as Cadence Flaherty in the sex-comedy American Wedding and Jeannie in the Christmas rom-com Love Actually along with Hugh Grant and Liam Neeson.

In 2004, she also appeared as ‘Eve’ in the musical romance drama Dirty Dancing: Havana Nights.

Back in 2011, January appeared as Elizabeth Harris in Unknown. During the same year, she has also featured in the Marvel film X-Men: First Class as Emma Frost along with James McAvoy, Jennifer Lawrence, Oliver Platt, and Kevin Bacon.

Besides this, her television ventures include In My Life, Huff, Project Runway, and a few more.

Her role as a school teacher in the TV film Love’s Enduring Promise gained huge recognition followed by Mad Men. So far, she has appeared in 67 episodes of the huge hit TV show, Mad Men. Additionally, she has been also starring as Melissa Chartres in The Last Man on Earth since 2015.

Being a famous actress, she earns a decent amount of money from her profession.

Currently, she is receiving $100 thousand per episode as a salary and has a net worth of $10 million.

Since she gave birth to her son, Xander Dane Jones, January came into a controversy regarding the father of her son.

Although, she has not disclosed his father. Furthermore, there was also a rumor that she is dating Nick Viall.

January Jones has a height of 5 ft 6 inches and weighs 61 kg. Furthermore, she has a pair of gorgeous blue eyes and blonde hair.

Besides this, her other body measurements include 37 inches bra size, 24 inches waist, and 36 inches hip size.