Jared Goff is currently in a relationship.

Jared is dating his long-time girlfriend Christen Harper who is a model and actress by profession. 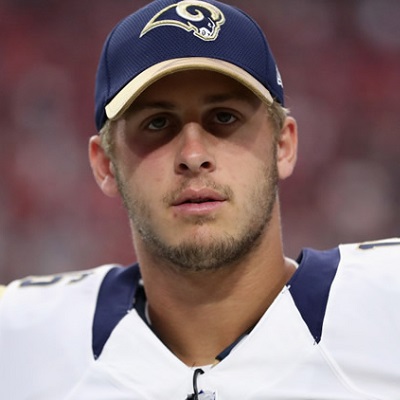 Who is Jared Goff?

Jared Goff is an American football quarterback for the Los Angeles Rams of the National Football League.

Goff was selected by the Rams with the first overall pick of the NFL Draft. He is the winner of PFWA Most Improved Player of the Year.

Jared Goff was born Jared Thomas Goff on 14th October 1994 in Novato, California, in the United States. His parents are Jerry Goff and Nancy Goff and they belong to the Anglo-Irish-American ethnicity.

Also, he has an older sister named Lauren Goff.

He joined Marin Catholic High School in Kentfield, California and then attended the University of California, Berkeley and graduated in 2013 in sociology.

Initially, Jared received scholarship offers from Boise State, Fresno State, and Washington State. However, he chose to attend and play for the University of California, Berkeley.

He set a new cal single-game record with 542 passing yards in a victory over Arizona State. In addition, he set a new Pac-12 single-season passing-yardage record, 4714 and conference record for touchdown passes in a season, 43.

Jared was selected with the first overall pick by the Los Angeles Rams in April 2016 in the 2016 NFL Draft. He signed a four-year contract for $27.9 million including an $18.6 million signing bonus.

He debuted his professional career against Miami Dolphins on November 20, 2016, and made his seven starts in his debut season at Rams. Goff threw his first career touchdown passes by the following week against the New Orleans Saints.

Jared began his 2017 season with a new head coach in Sean McVay. He completed 21-of-29 passes for 206 yeards during his first week. He played against San Francisco 49ers in his week 3 on Thursday Night football and completed 22-of-28 passes for 292 yards and three touchdowns.

Jared was picked up by the Rams in the fifth-year on April 23, 2019, and he agreed to a four-year extension worth $134 million featuring $110 million guaranteed. He played against Tapa Bay Buccaneers during week 4 and finished a career-high 517 passing yards, two touchdowns, and three interceptions.

Jared has an enzyme deficiency that prevents his body from breaking down proteins.

He has an estimated net worth of $16 million and earns about $7 million per season with the Rams.

Jared has auburn hair and brown eyes. His height is 6 feet 4 inches and weighs 101 kg.