Talking about his relationship details, Jared Harris is happily living a married life with Allegra Riggio. Riggio is a lighting designer and a TV host. The couple met for the first time at a comedy club where a mutual friend was performing in April 2009.

Moreover, Jared and Allegra walked through the aisle on 9 November 2013. They live in Los Angles at the present time.

Earlier, the star was married to Emilia Fox who is an English actress and presenter. The ex-couple tied the knot on 16 July 2005 and later separated in January 2009. He was also in a married relationship with Jacqueline Goldenberg in 1989. Sadly, they divorced three years later. 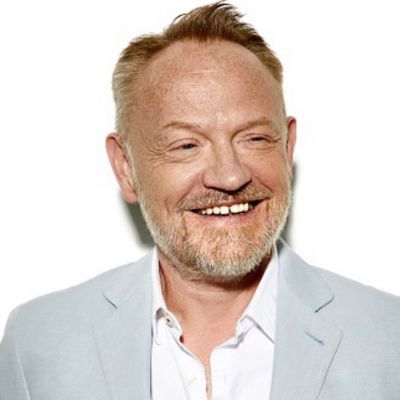 Who is Jared Harris?

Jared Harris is a well-recognized British actor and television personality. Harris is widely famed for his role of Lane Pryce in the AMC television series, Mad Men which earned him a nomination for the Primetime Emmy Award for Outstanding Supporting Actor in a Drama Series.

Moreover, he won the British Academy Television Award for Best Actor and was nominated for the 2019 Primetime Emmy Award for Outstanding Lead Actor.

Jared Harris was born on 24 August 1961. At present, his age is 60 years old. Likewise, his birthplace is Hammersmith, London, England.

Talking about his nationality, Harris holds a British identity whereas his ethnicity is Irish, Welsh, English.

Regarding education, the actor studied his early education at Ladycross School. Later, the star studied Downside School in Somerset. Harris attended Duke University in the U.S. and completed his graduation in 1984 with an MFA in drama. Also, he studied as an actor at the Central School of Speech and Drama.

Jared started his acting career making his debut appearance in The Rachel Papers in 1989. Then, the actor featured in the role of the aged Will Robinson in the movie, adaptation of the television series, Lost in Space. He also featured in Resident Evil: Apocalypse, Dead Man, and How to Kill Your Neighbor’s Dog.

Moreover, his remarkable role includes King Henry VII in the 2003 film adaptation of the novel, The Other Boleyn Girl. The star then appeared in Two of Us, Happiness, To the Ends of the Earth, The Riches, Lincoln.

In 2019, Jared featured in the role of Valery Legasov in the miniseries, Chernobyl. He earned the British Academy Television Award for Best Actor for the role and was even nominated for the Primetime Emmy Award for Outstanding Lead Actor in a Limited Series.

Freshly, Harris became a part of the Spider-Man spinoff Morbius. Also, he joined the cast of the biographical film, Rothko in 2021.

A famed English actor, Harris has earned a handsome amount of money from his profession. He has been active in his profession from the year 1989 till the present.

It is reported that Jared Harris has an estimated net worth of $8 million as of 2022.

Jared has never been part of any controversial matter or rumors till now. The star has been preoccupied with his professional and private life.

Harris prefers to enjoy his personal life and does not want to merge it with his professional life.

60 years old star, Jared has handsome looks and an admirable personality. He stands at a height of 5feet 10inches. Also, he has a balanced body weight of 84 kg.

Furthermore, Harris has blue eyes whereas his hair is blonde.

His chest size is 42 inches and his biceps is 13 inches.

Regarding his social media presence, Jared Harris is an active personality on social media. Jared has more than 53.4k followers on his official Instagram account @jaredharris.

He is also active on Twitter with around 49.3k followers.