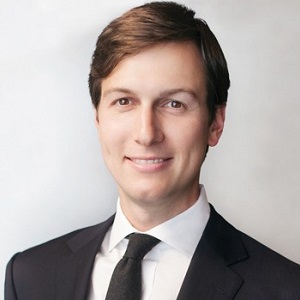 The only things that are really permanent are love, family, friendship, and that is a lesson. At the end of the day, that's really what it boils down to. The rest of it is just stuff

I ran my own business when I was 19, buying condos and renovating apartment buildings.

Jared Kushner is a married person. He is a one-woman man. He started dating Ivanka Trump since 2005. But it couldn’t go longer and they broke up in 2008. The reason behind it was supposed to be his parents not approving their relation. But the lovebirds couldn’t stay apart for long.

On October 25, 2009, they tied the knot with a grand marriage ceremony.

Who is Jared Kushner?

New Jersey-born Jared Kushner is the son-in-law of current President of U.S. (Donald Trump), Jared is an American real estate investor and developer and a publisher. He is known for his then-most expensive purchase of single-building property, “666 Fifth Avenue” for $1.8 billion. He also served as the senior advisor for Trump’s Presidential Campaign.

Presently, he serves as the senior advisor to the President of the United State of America, Donald Trump.

Jared was born in the city of Livingston in the state of New Jersey on January 10, 1981. His nationality is American and ethnicity is Ashkenazi Jewish.

His birth name is Jared Corey Kushner. He was born to parents, Charles Kushner(father) and Seryl Kushner(mother).

His father, Charles is a real estate developer. He was raised in a family that practiced Modern Orthodox Judaism. Although we don’t have much information regarding his childhood, it can be assumed it was like a billionaire’s style.

As per his education, he attended the Frisch School, a private, coed yeshiva high school in 1999. Afterward, he joined Harvard College. In 2003, he graduated from there with a Bachelor of Arts degree along with a major in Government.

Furthermore, he attended New York University. In 2007, he graduated from there with a J.D. and M.B.A. degree.

Jared Kushner initiated his real estate developer career from his college days. During his time at Harvard, he was a member of the Fly Club. He used to buy and sell buildings in Somerville, Massachusetts. Consequently, his investments made his earnings of $20 million profit.

After he graduated from New York University, he interned at Manhattan District Attorney Robert Morgenthau’s office. He made various investments as a real estate investor. He purchased the “666 Fifth-Avenue” building at a staggering $1.8 billion in 2007. Afterward, in May 2015, he purchased 50.1% of the Times Square Building from Africa Israel Investments Ltd. for $295 million. In 2008, he also served as the CEO of Kushner Companies.

Apart from real estate investor, he is also a publisher. He purchased “New York Observer” at the age of 25. Additionally, he changed the publishing method to tabloid form.

At present, he is busy handling the chaos caused by the coronavirus. However, at an early time of COVID-19, he said to the president Trump that the media was exaggerating the dangers of the coronavirus outbreak.

He has a net worth of $200 million but his salary is not revealed yet.

Jared was part of the controversy when Trump appointed him the senior advisor. Many sources stated that it was all the influence of nepotism. Presently, there are no rumors that surround his personal life.

Jared Kushner has a height of 6 feet 3 inches. His body weighs 86kg. He has dark brown hair and light brown eyes.