Jared Leto is in a relationship with a Russian model. Her name is Valery Kaufman. Together they were seen hiking in June 2020.

The pair were first linked romantically back in 2015.

He dated American actress Kristi McDaniel from 1997 to 1999.

He and Cameron Diaz were engaged for 1 year. They dated for 2 years after getting together in August 1999.

They were engaged in 2002 but later separated in March 2003. Additionally, he also dated American Actress Scarlett Johansson from 2004 to 2012.

Leto had a 1-month relationship with American Socialite Paris Hilton in 2008. From July 2011 until September 2011, he dated much younger Danish model Katharina Damm.

In February 2014, Jared had a fling with Kenyan actress Lupita Nyong’o. 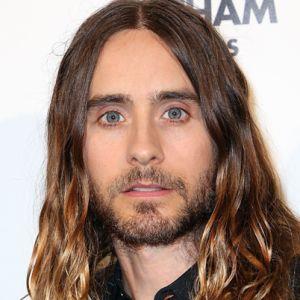 All those reports that I sleep in my closet. I don't know how people get that. People are so obsessed with what you do at home.

I was raised around a lot of artists, musicians, photographers, painters and people that were in theater. Just having the art-communal hippie experience as a child, there wasn't a clear line that was drawn. We celebrated creative experience and creative expression. We didn't try and curtail it and stunt any of that kind of growth.

I didn't even know the word 'celebrity.' I didn't have posters of people that I loved on my wall. Like, I must have listened to Led Zeppelin II 16,412 times. I didn't even know what the fuck they looked like. I thought musicians and actors and these types of people were like magic. It was royalty or you were born into it, or it was some stroke of luck or genius.

Who is Jared Leto?

Jared Leto is an American actor, singer, songwriter, and director. People know him for his roles in the films ‘Requiem for a Dream’ and ‘Dallas Buyers Club’.

Additionally, he is also co-founder and lead singer of the rock band 30 Seconds to Mars.

His parents divorced when he was a child, and he and his older brother, Shannon Leto, lived with their mother and their maternal grandparents.

Talking about his education, Leto dropped out of 10th grade. Later, he decided to return and focus on his education at the private Emerson Preparatory School in Washington, D.C.

After developing an interest in filmmaking, he transferred to the School of Visual Arts in New York City. Additionally, he also enrolled at Philadelphia’s University.

Jared Leto initially moved to Los Angeles, California. His breakthrough acting role came when he was cast as Claire Danes’ love interest, Jordan Catalano, in ‘My So-Called Life’. Additionally, he appeared in his first film role in 1995, in ‘How to Make An American Quilt’.

Leto has more than 30 credits as an actor. He has been part of movies and television series including ‘Blade Runner 2049’, ‘Suicide Squad’, ‘Mr. Nobody’, ‘Chapter 27’, ‘Lonely Hearts’, ‘Lord of War’, ‘Alexander’, ‘Cool and the Crazy’, and ‘Almost Home’ among others.

Jared Leto and Shannon Leto founded the band 30 Seconds to Mars in 1998. He serves as the group’s lead singer, Shannon plays drums, and multi-instrumentalist Tomo Milicevic rounds out the trio. The band released their fourth album, ‘Love, Lust, Faith and Dreams’ in May 2013. The band has a loyal following, especially in Europe.

Leto won the Academy Award for best-supporting actor for his role as a transgendered woman named Rayon in the film ‘Dallas Buyers Club’ in 2014. All in all, he has 50 wins and 34 nominations to his name. He won the Golden Globe in 2014 and AAFCA Award in 2013.

Leto has not revealed his current salary. However, at present, he has an estimated net worth of around $90 million(2022).

Furthermore, his portrayal of The Joker on ‘Suicide Squad’ was surrounded by controversies.

Talking about his body measurement, Jared Leto has a height of 5 feet 11 inches. Additionally, he weighs around 69 kg or 152 pounds.

Furthermore, his hair color is light brown and his eye color is blue. In addition, his shoe size is 11 (US).