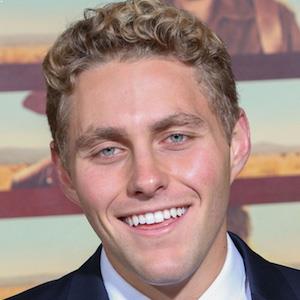 What is the relationship of Jared Sandler?

Currently, there are no records of the past relationships of Jared Sandler. He is quite secretive in nature and hence has not revealed much regarding his love life.

Who is Jared Sandler?

Additionally, he has appeared alongside his uncle in several of his films, including ‘Big Daddy’, ‘Eight Crazy Nights, ‘Grown Ups 2’, ‘Blended’, ‘The Cobbler’, ‘Pixels and the Ridiculous 6’.

Jared was born in Manchester, New Hampshire on July 11, 1993, to his parents Scott Sandler, father, and Denise Cohen-Sandler, mother.

Due to the influence of his uncle, he became interested in the world of show business in his childhood years and acting became a huge part of his early life.

Talking about his education, Jared attended the University of Southern California‘s School of Dramatic Arts and graduated from there.

Initially, Jared Sandler debuted as a child actor at the tender age of six in the 1999 film ‘Big Daddy’. The movie became a hit. This became the first step in his acting career. Since then he has appeared in more than 20 movies and television series.

Some of the movies and television series that Jared has appeared in are ‘Eight Crazy Nights, ‘The Benchwarmers, ‘Grown Ups 2’, ‘Shameless’, ‘Blended’, ‘The Cobbler’, ‘Paul Blart: Mall Cop 2’, ‘Pixels’, ‘Hotel Transylvania 2’ and ‘The Ridiculous 6’ among others. Apart from his acting career, Jared has also performed at various events as a stand-up comedian. Furthermore, as a director, he directed ‘Samezies’.

Jared does not have any award nominations to his name to date.

Although his uncle Adam Sandler has been involved in numerous controversies throughout his career, Jared, however, has managed to keep his career away from any notable controversies. Currently, there are no rumors concerning Jared and his career.

Jared Sandler’s height is 5 feet 10 inches and weighs 72 kg. His hair color is blonde and his eye color is blue.

Known Face In ‘Big Daddy’ Jared Sandler!! Get To Know More About His Career, Personal Life