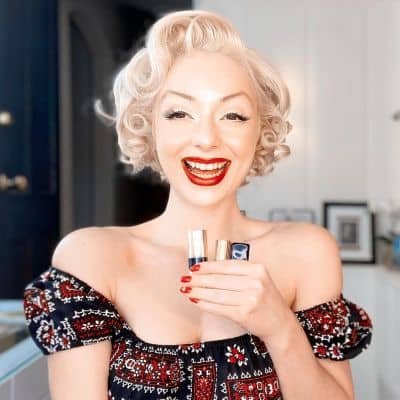 Talking about her love life, Jasmine Chiswell is currently living a blissful married life with her better half, Maverick McNeilly. McNeilly is a well-named music producer in California by profession.

The couple has not shared their marriage details and related news as well. However, they both feature on her TikTok videos. The couple lives in Los Angeles, California at the present.

Who is Jasmine Chiswell?

Moreover, she has gained popularity from her TikTok videos where she uploads videos dressed as Marilyn Monroe.

Jasmine Chiswell was born on 9 December 1993. At present, her age is 27 years old. Likewise, her birthplace is Glasgow, Scotland, United Kingdom.

Not much known about his father and mother’s details, Jasmine has been secretive towards her family details. Her dad is a government official whereas her mom is a homemaker. Moreover, she has an elder as well as a younger brother.

Talking about her nationality, Chiswell holds British and American identity whereas her ethnicity is Caucasian.

Regarding education, Jasmine completed her early education at a local school in Glasgow. Later she shifted to the United States. The famous star was offered to complete her master’s degree from the New York Film Academy regarding education.

Well-famed star, Jasmine Chiswell began her career in TikTok being a TikTok star. She started posting videos just for fun which was highly loved by the audience. And then, Chiswell starts growing interest in making a career in TikTok. Till now, Chiswell has more than 10.9 million followers whereas her videos have received more than 400 million likes. She posts fashion videos, modeling videos, lip-sync videos, and dance videos as well.

The popular TikToker started gaining popularity after she started posting videos portraying the outfit of Marilyn Monroe, Doris Day, and Grace Kelly. Further, she also posts a lot of lip-sync videos. She has become one of the Vintage Fashion Instagram stars and TikTok stars.

Earlier, Jasmine had created her YouTube channel named, Jasmine Chiswell on 26 January 2013. There, she posts her fashion and modeling videos. Presently, the channel has got more than 241k subscribers and more than 6 million views in her channel.

Apart from this, Chiswell has emerged in the short movie, It’s Not Real in the year 2014. Her second movie appearance was The Other Night in the year 2018.  She is widely active on Instagram as well. Jasmine has more than 644k followers on her Instagram and more than 450 posts till now.

Talented personality, Jasmine has earned a massive amount of money from her profession. Her main source of income is social media. She is active on all social media such as Instagram, YouTube, TikTok, and so on.

It is reported that Jasmine Chiswell has an estimated net worth of $5 million. She has earned a silver play button from the YouTube community as well.

However, the TikToker has not disclosed her exact salary, earnings, and assets details till now.

Jasmine has never been part of any controversial matter or rumors till now. Chiswell has a sustained balance between her professional and private life.

It seems that YouTube star prefers enjoying her personal life and does not want to merge it with her professional life.

27 years old star, Jasmine Chiswell has attractive looks, hot figures, and a charming personality. She stands at a height of 5feet 3 inches. Also, she has a balanced bodyweight of 55 kg.

Furthermore, Chiswell has dark brown eyes whereas her hair is blonde. Her body measurement is 34-26-35 inches (chest-waist-hip) respectively.

Regarding her social media presence, Jasmine Chiswell is an active personality on social media. Jasmine has more than 644k followers on her official Instagram account @jasminechiswell.

She is also active on Twitter with around 7k followers. She owns a YouTube channel named Jasmine Chiswell and it has more than 241k subscribers till the moment.

Moreover, Chiswell is also available on Facebook with nearly 7.3k fans and supporters.

The famous personality has more than 10.9 million followers on her official TikTok account @jasminechiswell.