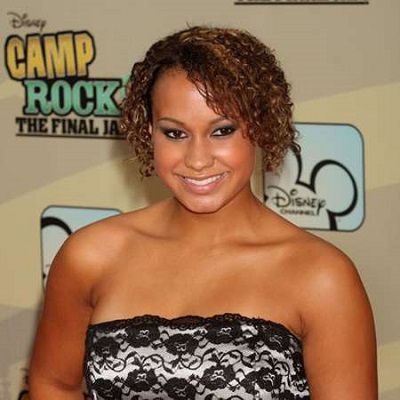 Previously, she dated Nathan Kress on 3rd May 2005. The two met at the premiere of a movie. However, they later separated after being together for three years on 14th October 2008.

Who is Jasmine Richards?

Jasmine Richards is a Canadian actress and singer. She is famous for her portrayal of Margaret ‘Peggy’ Dupree in the Camp Rock series.

Similarly, she is popular for portraying Margaret Browning-Levesque in the Family Channel sitcom Naturally, Sadie, and Judge Tara in Overruled!.

Jasmine Richards was born on June 28, 1990, in  Scarborough, Ontario. Currently, she is 29 years old. Her parents are immigrants from Barbados.

However, their names remain unknown. Also, she has an older brother whose name is Julian Richards. Richards’ ethnicity is unknown.

Jasmine Richards had an interest in acting at a very young age. When she was 11 years old, she started becoming serious in acting. She at the same age landed an acting job at her first open audition. Thus, her debut came as character Shakira in the television series, Timeblazers. Eventually, she appeared in 6 of its episodes. Similarly, in 2005, she portrayed the role of Margaret Brown-Levesque in Naturally, Sadie.

Furthermore, she also appeared on an episode of Da Kink in My Hair, The Latest Buzz. Moreover, in the year 2009, she took the role of Tara Bohun in Overruled!. After that, she was then seen in The Listener as Jan Miller in 2011, in King’s two episodes.

Also in 2011, she received the role of Maya in Redakai: Conquer the Kairu. Moreover, she has appeared in seven episodes of Bomb Girls as Reggie.

In addition to TV shows, she has also played roles in many films. Her movie debut came in the ABC Family television film, Princess. Her most famous or the most distinguished role as an actor came in 2008. Jasmine appeared as the character Margaret “Peggy” Dupree in the 2008 Camp Rock.

Moreover, she also performed the song “Here I Am” in this movie. However, her voice was actually dubbed with the voice of Renee Sandstrom.

Her role as Peggy was loved by the fans and critics. As a result, she went on to reprise her role in the 2010 second part of the franchise, Camp Rock 2: The Final Jam.  Moreover, in 2012, Jasmine portrayed the role of Tiffany in the movie, Picture Day. Jasmine Richards is an actress loved by all her colleagues and fans.

Jasmine’s exact net worth remains unknown. However, according to some notable online sources, her net worth is around $500,000.

Unfortunately, her annual income remains unknown and is still under review. Her main source of income is acting.

Jasmine has a height of around 5 feet 4 inches. In addition, she weighs 65 kg. The actress has dark brown eyes and her hair color is brown, too.

You may also like to read Demi Lovato, Nick Jonas, and Noah Cyrus.