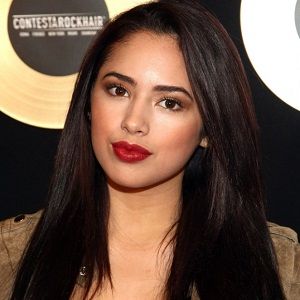 The 24-year-old American singer is an unmarried woman. However, Jasmine Villegas is in a relationship with Ronnie Banks. The couple began dating since August 2014 and also welcomed a baby girl on 19 February 2016. In December 2016, the couple got engaged after dating for more than two years. Previously, she has also dated Brandon Kane in 2009 and broke up just after a couple of months.

Besides this, there was also a rumor that this beauty was going out with Justin Bieber in 2010. However, they didn’t disclose the news. Currently, Jasmine and Ronnie are enjoying their life with their daughter and living elegantly.

Who is Jasmine Villegas?

Jasmine Villegas is an American pop and R&B singer. She signed to Sony Music at the young age of sixteen. In 2014, she launched her first EP, That’s Me Right There with Interscope Records. Furthermore, she came into the spotlight after appearing in Justin Bieber’s huge hit song Baby.

Jasmine was born on December 7, 1993, in San Jose, California, United States. She is the daughter of Bernadette Vales and Robert Villegas.

Talking about her nationality, she is American and her ethnicity is mixed. She is of Filipino, Irish, English and Mexican descent. Furthermore, she has three brothers, Robert Villegas, Jream Andrew Sablan, and Justin Villegas.

As a child, her childhood was not so easy as her parents separated. Later, her grandmother helped her to get in modeling. Concerning her education, there is not any information regarding her educational background.

Jasmine began her acting career in a commercial at the young age of nine. When she was 11 years old, she performed the national anthem for the Los Angeles Clippers.

At the age of 16, she signed to Sony Music. Furthermore, she got huge recognition after appearing in the famous Justin Bieber’s song Baby. Moreover, she has also written with musician Nick Jonas. Later in 2013, she signed to Interscope Records. Just after a year, the American singer featured along with American rapper Becky G, on the cover of Latina magazine’s February 2014 issue.

In addition, her other hit singles include, Serious, All These Boys, Didn’t Mean It, and Paint A Smile. Furthermore, she has also appeared in several music videos such as Jesus Walks” by Kanye West, “Eenie Meenie” by Sean Kingston and Justin Bieber, “Slide Over” by Baby Bash, and much more.

Being a famous singer, she earns a healthy amount of money from her profession. However, her salary and net worth are unknown.

As of now, Jasmine has won iHeartRadio Music Award for Best Cover Song for Uptown Funk.

So far, there are not any drastic rumors regarding her personal and professional life. Furthermore, she has never faced any controversy in her career to date. It seems she has total focus on her career rather than stuck in any controversial stuff.

Jasmine has a height of 5 ft 6 inches and weighs 54 kg. Furthermore, she has a pair of gorgeous dark brown eyes and black hair. Her body measurements include 35 inches bra, 25 inches waist, and 35 inches hip size.

The Update! Where is the Selena Gomez-Justin Bieber relationship heading to?