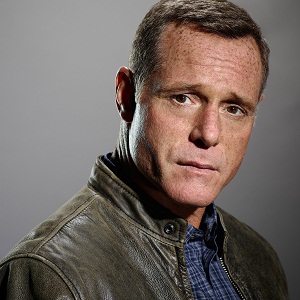 I've yet to meet a person in my life who doesn't have some moral ambiguity.

Scientology delivers what it promises under the guise of tearing away falsity, neuroses, psychoses. It creates a brainwashed, robotic version of you. It's a 'Matrix' of you, so you're communicating with people all the time using Scientology.

Jason Beghe is a divorced man. Previously, he was married to Angie Janu. The couple tied the knot in the year 2000. Janu is an American actress. The couple together has two children, both sons, named Bix and Bear.

After 16 years of their relationship, they started having differences and decided to separate. However, the couple divorced after a year of the separation i.e., in 2017. The reason for their divorce is said to be due to irrecoverable differences. He has taken the physical custody of their children.

The family lives together in a ranch in Malibu. Other than this, there is no much information regarding the relationship history and record of Beghe in the mainstream media to date.

Who is Jason Beghe?

Jason Beghe is an American film and TV actor. He is best known for his roles in Chicago P.D., The Next Three Day and Thelma & Louise.

Jason is the son of Bina House(mother) and Renato William Beghe(father), a U.S. Tax Court Judge. He has three siblings, Francesca Beghe Green, Adam Beghe, and Eliza Beghe. His sister, Francesca Beghe, is a singer/songwriter. Jason’s great-grandfather Charles S. Deneen was a two-term governor of Illinois and one-term U.S. Senator during the early 1900s.

Before venturing into the acting career, Beghe worked as a model in Europe. The 1985 film Compromising Positions was his feature film debut. A year later in 1986, he had his first recurring role on TV on the HBO comedy series 1st & Ten. He also starred in the latter’s sequel Training Camp: The Bulls Are Back.

Next, Beghe played an ice hockey star in the 1989 TV film The Case of the All-Star Assassin. In 1991, he played a State Trooper in the film Thelma & Louise and Demi Moore’s love interest in the 1997 movie G.I. Jane. That same year, he also had recurring roles on Picket Fences and Melrose Place as well as became a cast member of Chicago Hope.

In 1998, Beghe co-starred in the CBS TV drama series To Have & to Hold, playing police officer Sean McGrail. Apart from that, he also has appeared in acting roles on various other TV series like Numb3rs, CSI: NY, Everwood, Criminal Minds, Veronica Mars, Cane, etc.

In 2008, Beghe played the character of an exorcist Ray Purvis in the horror film One Missed Call. A year later, he had a guest-starring role on the TV show Californication. In October that same year, Beghe filmed the movie The Next Three Days. It was released in 2010.

On December 10, 2013, it was announced that Beghe was signed to voice the character of Mauler in the animated feature film Dawgtown. Since 2014, he has starred as Sergeant Hank Voight in the TV series Chicago P.D., a spin-off of Chicago Fire. Beghe also appeared in the 2015 HBO documentary Going Clear, based on the book of the same name by Lawrence Wright.

Apart from that, Beghe also appeared in the 2015 HBO documentary Going Clear, which is based on the book of the same name.

Jason Beghe: Salary and Net Worth

While his salary is not known, he has a net worth of $1.5 million.

Beghe has been dragged into various rumors and controversies regarding his time with and after Scientology. After leaving Scientology, he has repeatedly criticized the Scientology’s path and faith.

Beghe was also under criminal investigation in 20111, for reportedly attacking a man who was using a strimmer in his garden.

Jason has a height of 5 feet 9 inches. His body weighs 73kg. He has brown eyes and salt-pepper hair color.