People mostly know him for his appearances in the American television series ‘Roswell.’

Jason Behr was previously in a relationship with Shiri Appleby. Additionally, he has also dated his Roswell co-star Katherine Heigl.

Currently, Jason is a married man. He is married to actress KaDee Strickland. The pair met while shooting ‘The Grudge’ in Japan. They married on November 10, 2006. 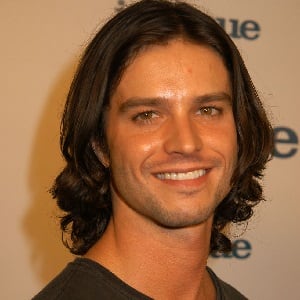 If I could be in any band, I think it would have to be The Beatles. That would have been a lot of fun

It's the Peter Pan in me, I don't think I'll ever grow up. - on playing a teen

It would be presumptuous of me to tell you that we are the only intelligent life form that ever existed. I thought my high school principal was an alien - he was so bland. - on alien encounters

I think if I could be any superhero, it'd probably be my mom...but I don't think I'd look too good in high heels, so it's not gonna happen.

Who is Jason Behr?

Jason Behr is an American actor. People mostly know him for his appearances in the American television series ‘Roswell.’

Additionally, he has appeared in several other movies and television series to date including ‘The Grudge’, ‘Step by Step’, ‘7th Heaven’, and ‘Buffy the Vampire Slayer’ among other.

Behr was born in Minneapolis, Minnesota on December 30, 1973. He was born to parents Patricia Ann Steiner and David Behr. Additionally, he became involved in the world of show business from an early age.

Jason Behr initially began doing commercials for Stomper Trucks. In addition, he also modeled for local department stores. After moving to Los Angeles, he appeared in over 75 commercials. Eventually, he had his first minor role in the TV series ‘Step by Step’ in 1994.

Additionally, in 1996, Jason appeared in ‘Alien Nation: Millennium’ and ‘Pacific Blue.’ Since then, he has appeared in several other movies and television series. All in all, he has over 25 credits as an actor.

Behr won the Young Hollywood Award in 2002. Additionally, he has garnered nominations for Saturn Award and Teen Choice Award.

Behr has not revealed his current salary. However, he has an estimated net worth of around $ 2 million as of 2022.

Behr has not been involved in any notable controversies in his career. Furthermore, at present, there are no rumors concerning his life and career.

Talking about his body measurement, Jason Behr has a height of 6 feet (1.83 m). Additionally, he weighs around 75 kg. In addition, his hair color is dark brown and his eye color is hazel.