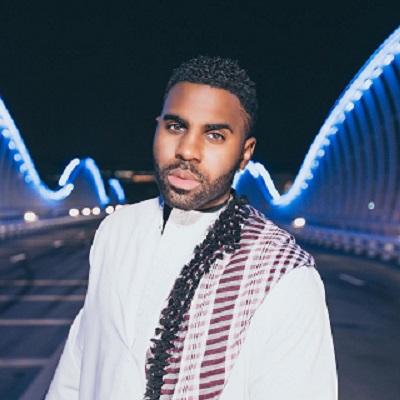 Jason Derulo has settled in a relationship. He is dating a girl named Jena Frumes. They were recently seen together at their private gym.

Derulo’s previous relationship was with Jordin Sparks and Daphne Joy who both are Glam Models.

Who is Jason Derulo?

Jason Joel Desrouleaux is an American singer, songwriter, and dancer. He is professionally known as Jason Derulo.

Since the beginning of his solo recording career in 2009, Derulo has sold more than 30 million singles and won 11 Platinum singles, including “Wiggle,” “Talk Dirty,” “In My Head,” and “Whatcha Say”.

Derulo was born on born September 21, 1989, and is the son of Joel Desrouleaux (father) and Jocelyne Desrouleaux (mother). His birthplace is Miramar, Florida, the US and is the youngest of three children.

The information about his siblings is unknown.

Derulo holds American citizenship but is of (All-American) ethnicity.

He has attended Dillard High School in Florida and went on to The American Musical and Dramatic Academy in New York.

Jason Derulo has written songs for performers such as Diddy, Danity Kane, Donnie Klang, Sean Kingston, Cassie, and Lil Wayne since he was young and also intended to become a solo performer.

Derulo’s debut album, Jason Derulo, was published on March 2, 2010, with an umlaut like Jason Derülo. In early March 2010, Jason Derulo first peaked in the top ten UK and Irish Album Charts. In his appearances, he spent six weeks promoting the album as one of the opening acts for Lady Gaga’s The Monster Ball Tour 2009–2010. The album’s third single is “Ridin’ Solo“.

In 2011, Derulo recorded a track for her album Unbroken with Demi Lovato called “Together.” His second studio album, Future History, was published on September 27, 2011. Derulo detailed his journey to record the album through a series of webisodes posted on his official website.

Derulo published a new single on March 3, 2017, entitled “Swalla“. On March 17, Pitbull and Derulo published the song “Educate Ya” from the former Climate Change album. On March 31, Cheyenne Frontier Days announced the addition of Jason Derulo to their 2017 Frontier Nights concert roster on Friday, July 28, 2017.

At the 2017 Billboard Music Awards on May 21, Derulo announced the title of their next studio album 777.

Derulo’s net worth is estimated to be around $10 million and his salary is around $4 million per annum. His primary source of income is from music and songs.

This singer has kept himself away from rumors and controversies.

Jason Derulo is 6 feet in height. He weighs around 75 kg, He has Black hair and dark brown eyes.

Celebrities who were spotted in the UAE and Dubai in last week!