Posted by MarriedBiography Posted on March 30, 2021 | In Child , Pregnant , Relationship
Share this 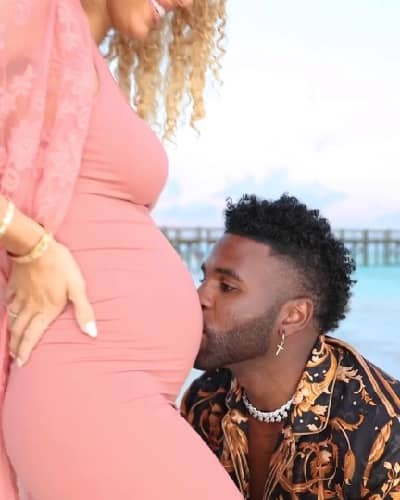 Jason Derulo is going to be a dad with girlfriend Jena Frumes! The couple confirmed the happy news on 28th March 2021 on Instagram. Jason posted a video of the two walking on the beach while Jena flaunts her growing belly bump.

They wrote ‘Coming Soon’ on the sand and he captioned the video,

Jena herself shared a picture of them cradling the belly bump while on the beach. She called her and Derulo ‘mom and dad’. It was just back in December, Jason revealed that there was no rush to have children even though he wanted one. He said,

“I’m not one to rush anything but I’d be lying if I said the thought didn’t cross my mind. As the years go by, you’re like, damn, what is it all for? I watch all my peers have kids and I still don’t have any, so I think about it often. I try to be a cool uncle and give them experiences I didn’t have.”

Also read Jason Derulo is dating Jena Frumes who is the ex-girlfriend of Jesse Lingard!

“But then I can always hand them back … It kind of solidifies things when you’re spending that much time around somebody. You either love it or you hate it. But it’s been pretty great and a lot of fun, so I’m enjoying it. We were born on the same day, so we’re so similar.”

His mother had not met her at the time due to the covid and mama Derulo had only talked to Frumes over the phone. Jason and Jena started living together during the time of Covid. Due to the global pandemic, he got a chance to spend a lot of time with his girlfriend.

Jason Joel Desroulea is an American singer, songwriter, and dancer. He is professionally known as Jason Derulo.