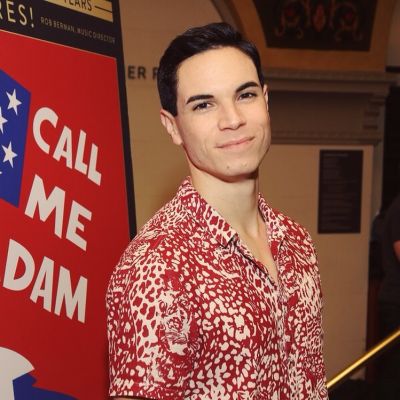 Jason Gotay is openly gay. Recently, he gets married to a long-term boyfriend, Michael Hartung.

The duo met for the first time in the year 2014 on the set of NBC’s Peter Pan Live!. Since then they have been together for more than six years. In January 2021, the beautiful couple announced their engagement via Instagram.

Soon after, they tied the wedding knot in October at The Kester Homestead in Memphis.

Who is Jason Gotay?

Presently, he is starring in the role of Rafa Caparros in HBO Max’s Gossip Girl along with Kristen Bell, Jordan Alexander, Thomas Doherty, and Elii Brown.

He was raised by his single mother named Marla Gotay. He has two siblings a brother named Dan Gotau and a sister named Jill Gotay.

Talking about his academic background, he went to Emerson College and later studied at Marymount Manhattan College.

Further, he holds an American nationality and belongs of Caucasian descent.

Jason started his career as a theater artist. In 2010, he played Angel Dumott Schunard and Gordon in the stage play Rent on Westchester Broadway Theatre in New York. He played in a Salt Lake City production at Pioneer Memorial Theatre as Angel. He got a big break in his theater career after the performance in Bring it on: The Musical Tour as Randall from 2011 until 2012.

In 2020, he starred in the television series called Love Life.

Jason stays miles away from the spotlight of the media. He hasn’t been part of any sorts of rumors and controversy that create a headline in the media.

Jason’s main source of income is his acting career. He might have accumulated a decent amount of fortune throughout his profession.

The actor has an impressive height of 5 feet 10 inches tall. Likewise, his weight is about 67 kg. He has a dark brown pair of eyes and his hair color is black.

Further, he has a fair complexion.