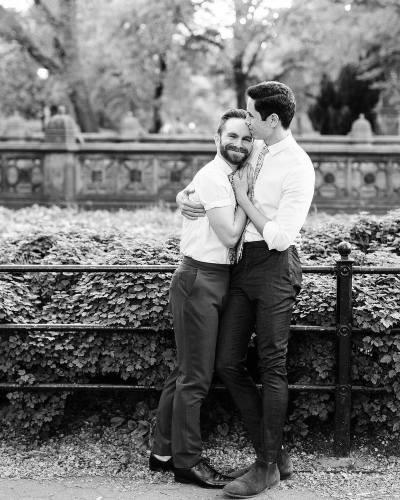 Jason Gotay and Michael Hartung are officially married! The couple married at The Kester Homestead in Memphis, New York.

Their wedding was planned by Jason Mitchell Kahn to help make their special day go off without a hitch. For the wedding, they wore matching cream-colored outfits. Their nuptial was attended by less than 100 guests.

Likewise, the vows were emotional and were held in a small outdoor area which was like an oasis in the forest. Their vow made the guests emotional and tears were shed by guests. For the cocktail hours, they formed a circle with their guests and joined hands to spread the love to one another. Their party was held inside a gorgeous barn.

“She based her speech on something old, something borrowed, something blue and something new, and she related each of those things to them and their families,”

More on the relationship of Jason Gotay

Jason Gotay and Michael Hartung met each other on the set of NBC’s Peter Pan Live that aired in 2014. They started dating each other soon after. The couple announced their engagement in January 2021 through Instagram. They shared photos of engagement rings.

Jason wrote an essay for Brides where he explained their love story and wrote,

“We want a ‘sophisticated backyard wedding’ that will be elegant and beautiful, but more importantly, a real party with s’mores around the bonfire and dancing under the stars. I cannot wait to marry the love of my life.”

Likewise, their relationship has been going well for six years.

James Michael Tyler who played ‘Gunther’ died at the age of 59 due to cancer!
Tags : Actor Gossip Girl