Jason Hawes is an actor, author, producer. He is the founder of 'The Atlantic Paranormal Society.' Jason is married since 1998 and he has five children with his wife.

Jason is a married man. He is married to his longtime girlfriend, Kristen Cornell.

The couple tied the knot on 20 May 1998. Hawes and Kristen together have five children: three daughters, Samantha, Haily, and Satori, and two sons, Austin and Logan. 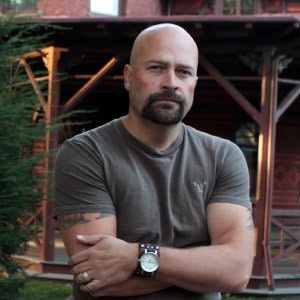 We are firm believers of the paranormal, but we believe over 80 percent of all claims can be disproved

If your cat's speaking Latin, you might have a problem

All a skeptic is is someone who hasn't had an experience yet.

Who is Jason Hawes?

Jason Hawes is an American plumber and the founder of The Atlantic Paranormal Society (TAPS), based in Warwick, Rhode Island.

He is also one of the stars and co-producers of Syfy’s Ghost Hunters, which will end after its eleventh season.

Hawes was born Jason Conrad Hawes on December 27, 1971, in Canandaigua, New York, USA. His nationality is American and his ethnicity is North American.

However, he moved to Warwick, Rhode Island a few years later, in 1979. There is no information on his parents and siblings.

He graduated from Toll Gate High School in Warwick, Rhode Island, class of 1990.

The exact onset of the career of Jason Hawes is not known. According to his own account, Hawes began to see apparitions at the age of twenty after a girlfriend who practiced Reiki manipulated his life force energy.

Hawes founded the Rhode Island Paranormal Society (RIPS) in 1990 as a support group for people who had paranormal experiences.

Ghost Hunters became the flagship show of the Syfy Channel and made it one of the top watched channels on cable.

In 2010, he appeared in the TV series Late Night with Jimmy Fallon. From the same year to 2011, appeared as Himself – Celebrity Contestant, in Who Wants to Be a Millionaire. Syfy 20th Anniversary Special and 20/20 followed in 2012.

In 2014, he appeared as himself in two TV series: The Wil Wheaton Project and Steve Harvey. Two years later, Hawes played the role of Troy in the movie Ghost Team.

Apart from these, Hawes also has written various books.

Ghost Trackers: A Novel, Ghost Files: The Collected Cases from Ghost Hunting and Seeking Spirits, and Ghost Town: A Novel, are among the others.

Hawes has also used public ghost hunting events and personal appearances to raise money for various charities, such as the Shriners Hospitals for Children and Cure Kids Cancer.

He and fellow TAPS founder Grant Wilson are longtime co-workers at their day job as plumbers for Roto-Rooter. Hawes brought Wilson into the plumbing business.

The two are former co-owners of the Spalding Inn, based in Whitefield, New Hampshire. They finally sold the Inn in the summer of 2014.

Hawes had received some threatening emails in March 2005. It later involved the hacker using his email as well to threaten the then president, George W. Bush.

Jason has a height of 6 feet 1 inch. He has dark brown hair and blue eyes. Furthermore, there are no details regarding his body measurements.

Also know more about the early life, career, net worth, relationships, and controversies of other plumbers and the founder including Kenneth Branagh, Nicholas Brendon, Mike Vogel, and Kevin McKidd.